Skip to content
398 shares
Are you planning a trip to the most magical place on earth?  Disney World Vacation Planning can be overwhelming with all the magical experiences to choose from.  If you have a pirate fan in your family make sure to join the Pirates League at the Magic Kingdom, a Disney pirate experience that offers unforgettable memories. 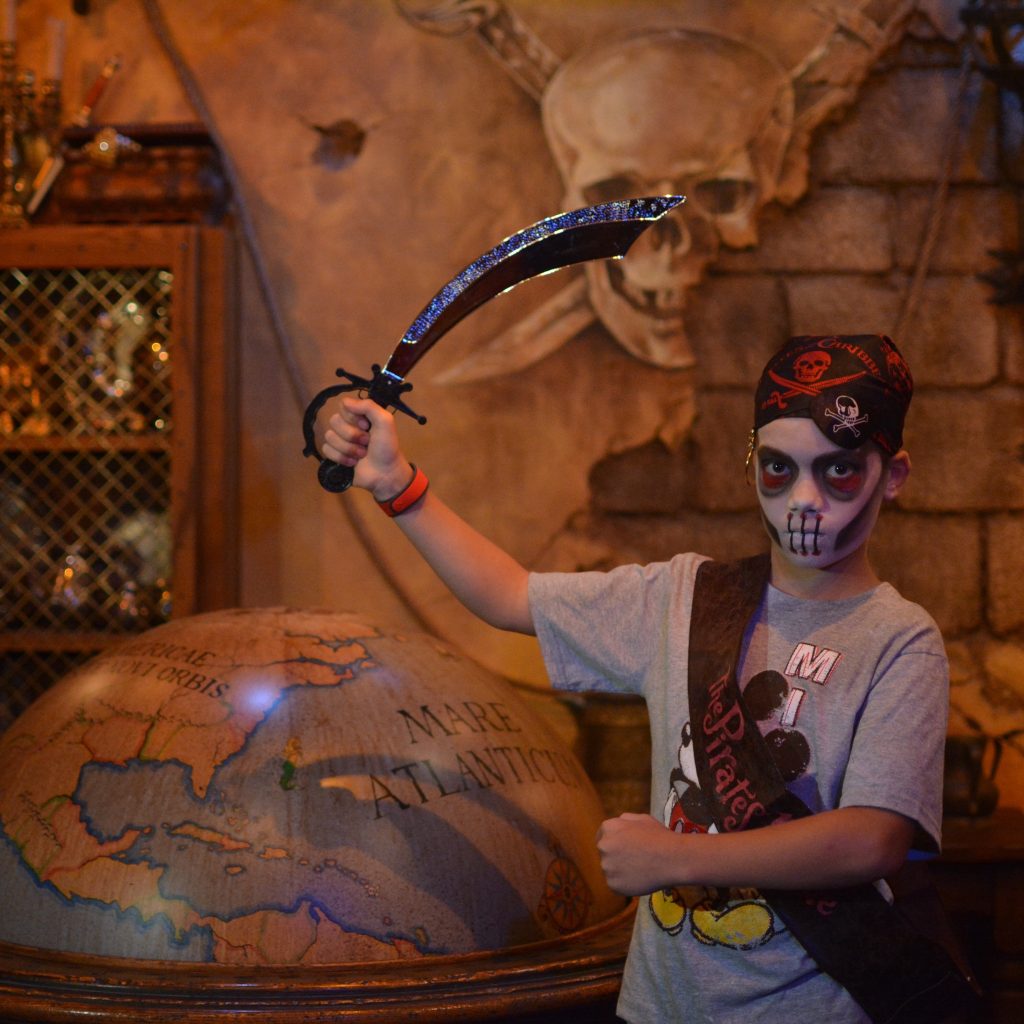 Join the Pirates League and Become a Pirate at Disney World

We had visited Walt Disney World several times before learning about the Pirates League in Adventure Land at the Magic Kingdom.  It felt like a hidden treasure the first time we went, we had known all about becoming a princess and a knight at the Bibbidi Bobbidi Boutique, but this wasn’t of interest to my boys.  However, the Pirates League was a perfect dress up attraction for my Pirates of the Caribbean fanatics!  I am sharing where it is, how to make reservations, the packages they offer, how much this experience costs, and of course my Pirates League review below, so you’ll be ready to become a pirate or mermaid, that’s right you can get a mermaid makeover at the Magic Kingdom too! 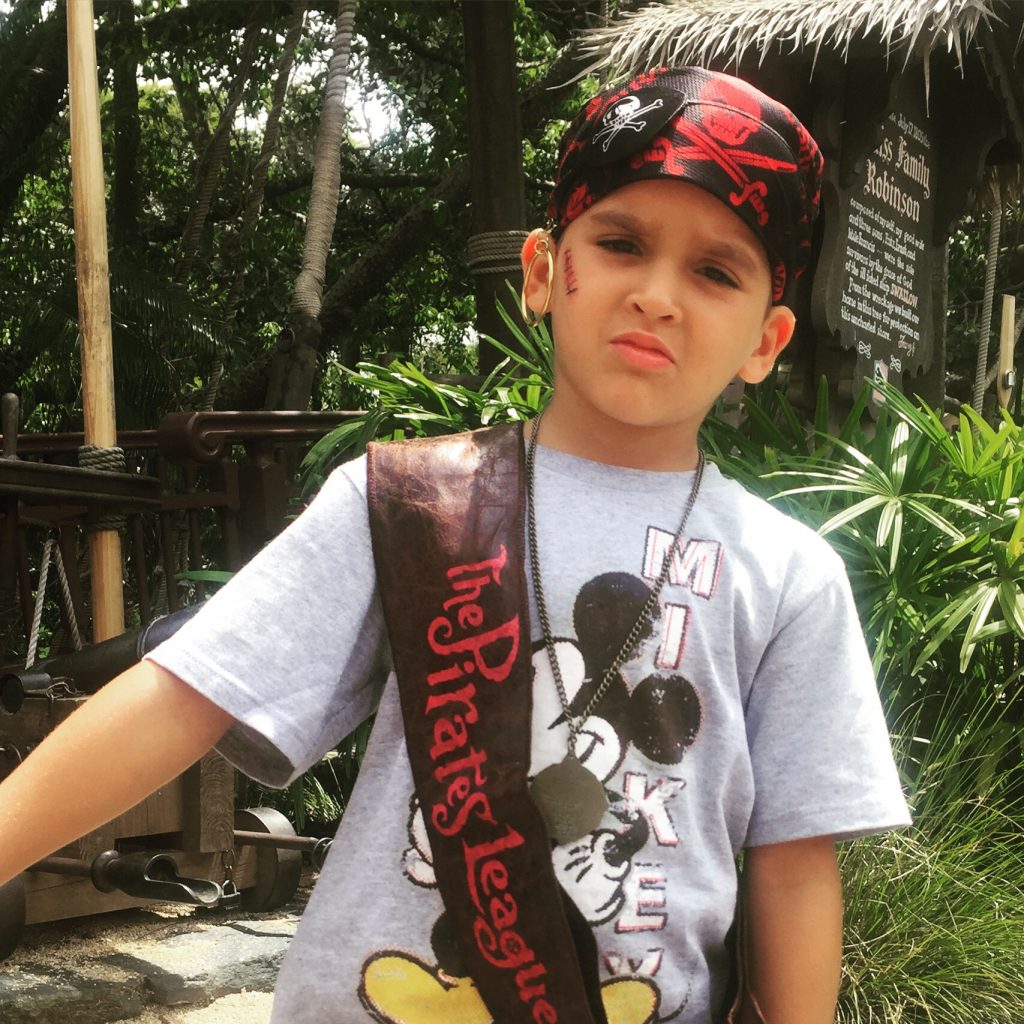 WHERE IS THE Walt Disney World PIRATES LEAGUE

The Pirates League is located right next to the Pirates of the Caribbean ride in Adventureland at The Magic Kingdom.  As you enter Magic Kingdom go straight down Main Street USA towards the Cinderella Castle, once you enter the central plaza there are 4 entrances into each land.  You’ll want to take the first entrance on the left to enter Adventureland, and follow the road through the land till you reach the Pirates of the Caribbean ride on the left.  The Pirates League did feel as though it was tucked away when we first visited, however, the check-in desk is located outside of the door next to the ride entrance and Pirate Boutique which helped us figure out where to start our makeover experience.

HOW TO Make Pirate League Reservations

I highly recommend making reservations before getting to Disney World.  Reservations can be made up to 180 days in advance and makeover time slots fill up fast.  You can schedule your pirate or mermaid makeover by calling Disney World at (407)WDW-STYLE or through the reservation system on the Disney Website.

Both times we have visited The Pirates League they were booked up completely, and I was very thankful to have had made the reservations in advance.  Once you have your reservations, simply arrive at your scheduled time and head to the check-in counter. 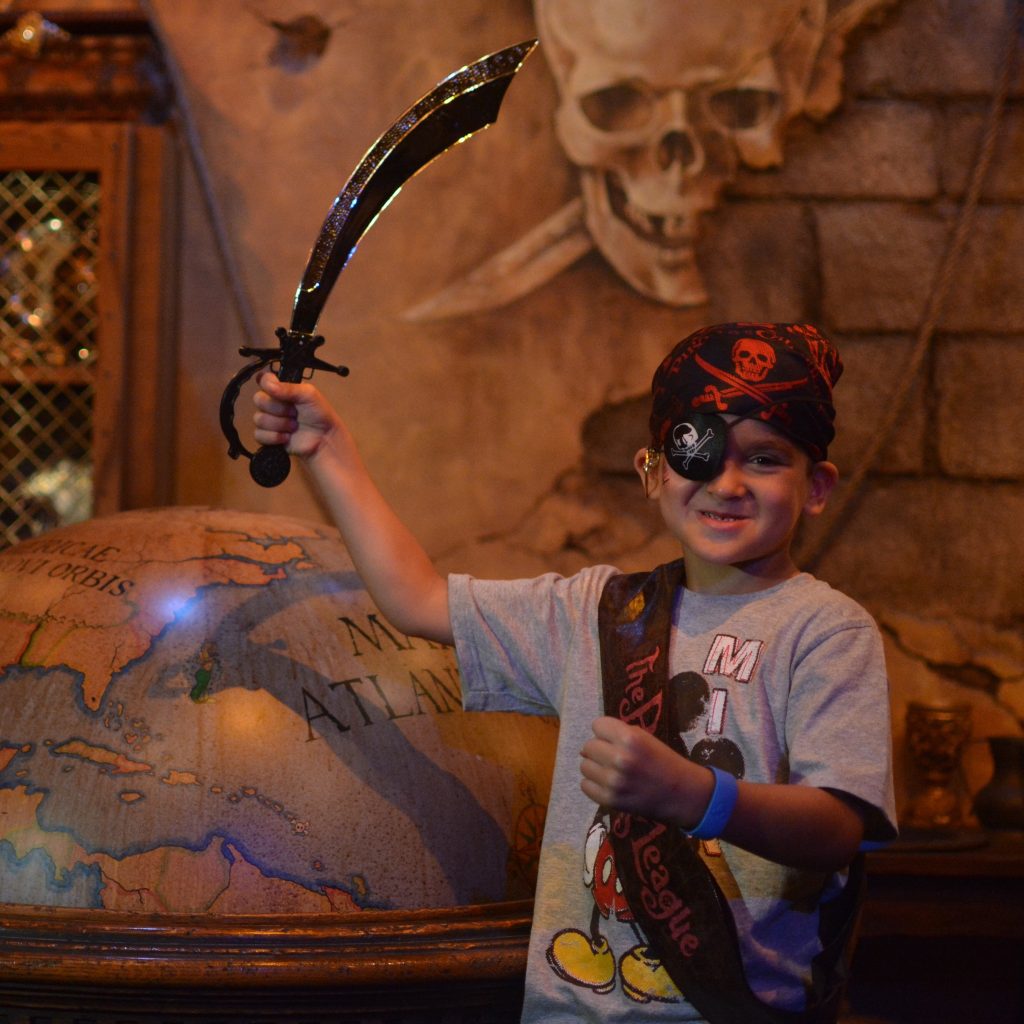 There is a large selection of pirate and mermaid makeover packages, each one includes accessories, cool pirate makeup or mermaid face design, and some packages even include costumes.  A makeover at the Pirate League cost between $18.95 and $99.95.
The Current WDW Pirates League Packages you can choose from are: 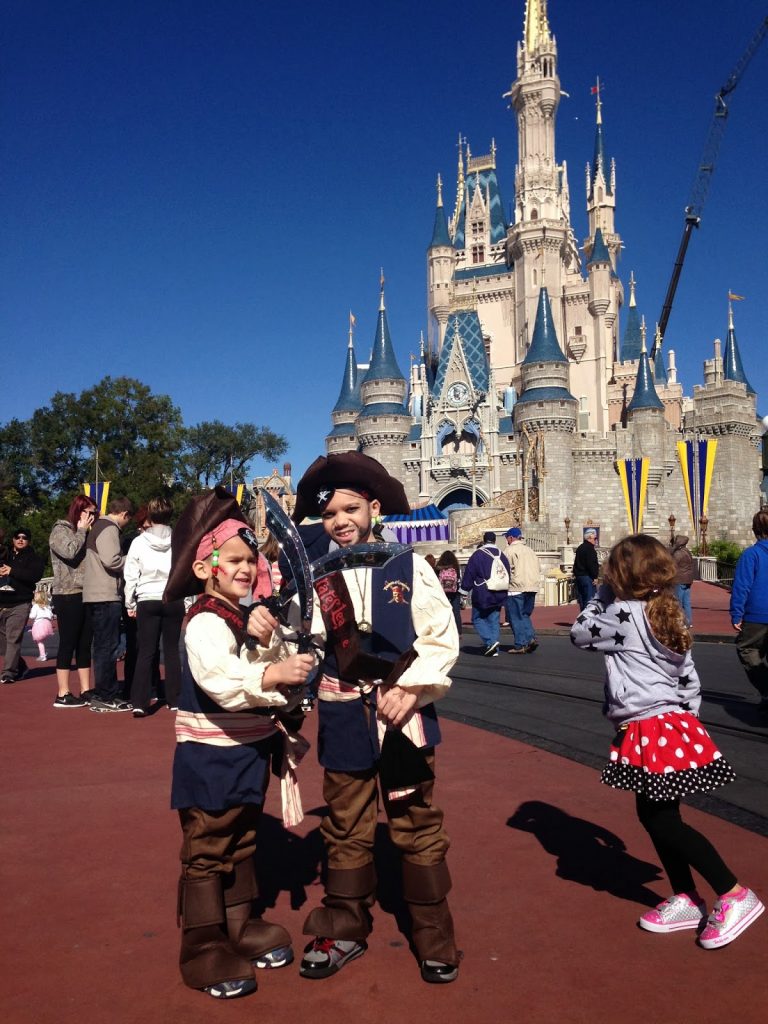 Tips for The Pirates League at Magic Kingdom

Book Your Reservations Early – As I said earlier reservations fill up fast, so try to book your makeover as close to the 180 days out as possible to get the day and time you want.  I would suggest making your reservations for early in the day so that your little pirates and mermaids can enjoy their makeover for as long as possible.

Allow enough time in your planning – The makeover takes between 30 minutes to an hour depending on which package you choose.  Make sure you don’t book dining reservations or fastpass+ plans to close to your Pirate Appointment, you want to be able to fully enjoy the experience without worrying about getting to another area of the park.

Arrive Early – On busy days the check-in line can grow, so I suggest arriving around 20 minutes before your reservation time

Buy a Pirate Costume or Themed Shirt Before You Go – If you want to go with the budget friendly pirate makeover packages, pick up a cheap costume online or a Pirate themed shirt at the Disney Store before you visit.

A PIRATES LEAGUE REVIEW – Our Experience

Once we arrived in Adventureland, we checked in outside and chose the pirate package we wanted.  During our first visit, it was a cold January day so we went with the deluxe package which included the pirate costumes.  However, when we did The Pirates League again during the summer months, it was just too hot to wear the costumes through the park on an August day in Orlando.  If you’re visiting during the hotter months I would say save your money and go for a smaller package that is just as adorable!

The first year, I was also planning a princess and pirate-themed birthday for the twins so the costumes got a lot of love even after we left Disney World.

For this experience, they had us set up in a changing room before meeting our Pirate Master, so the boys could change into the cool new uniforms.

Next, the kids received their official Disney pirate names and signed the large pirate book. 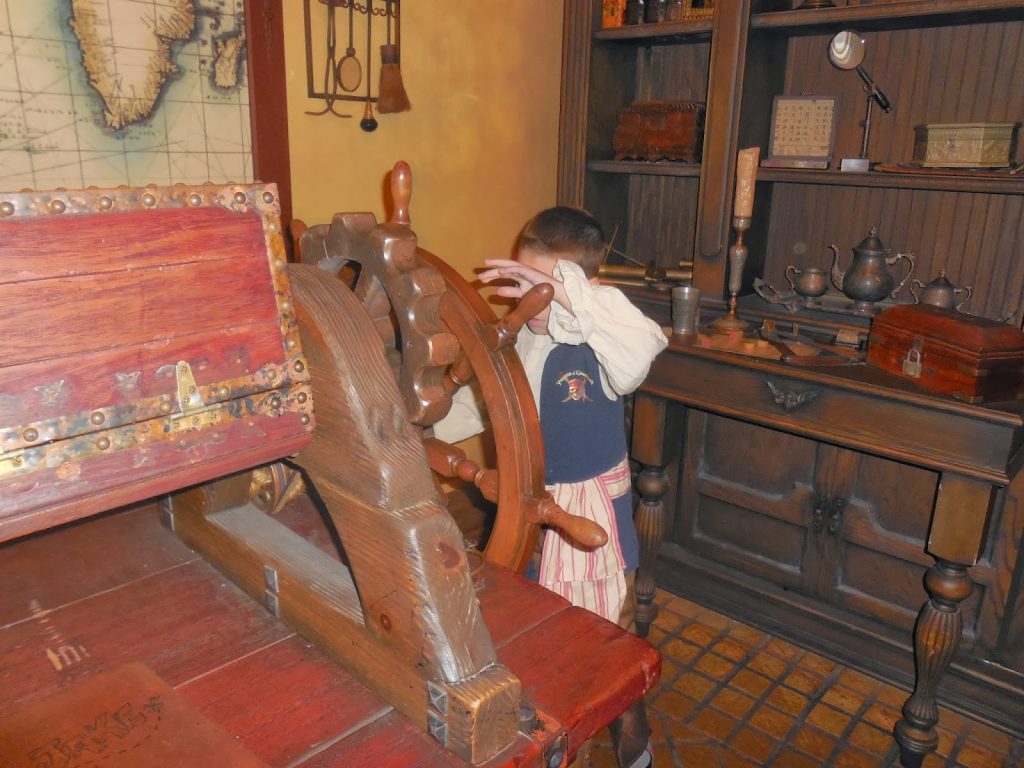 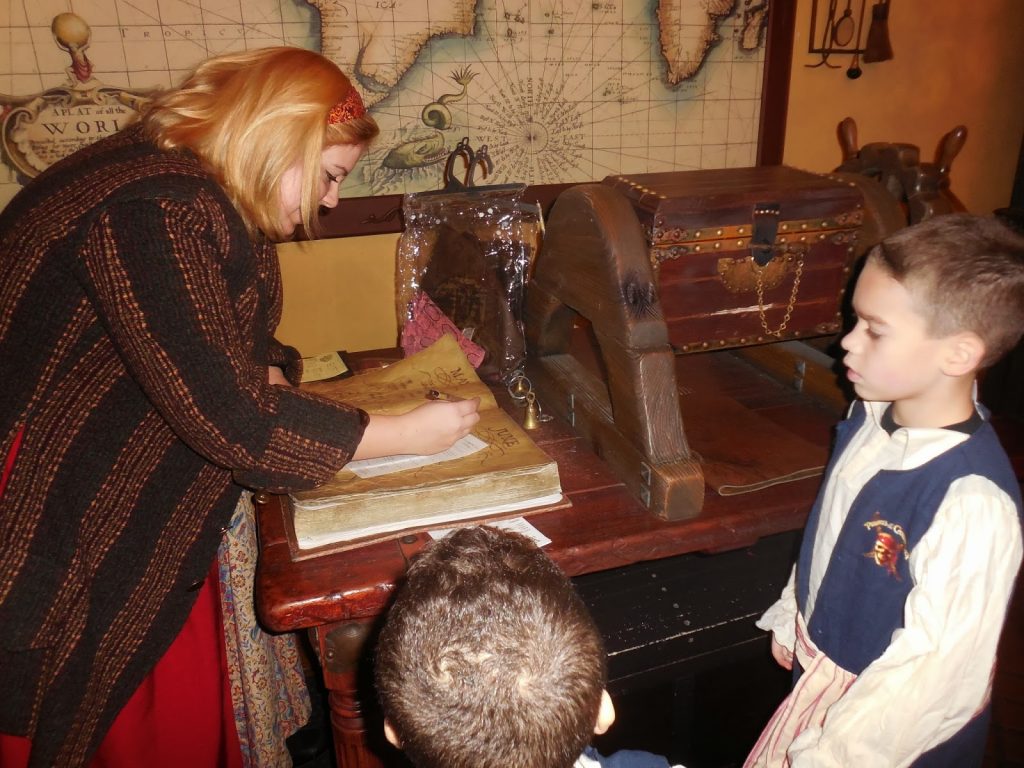 After the little pirates were named and in the official pirate book, we got to move along into where all the fun begins.
The Pirate Master introduced themselves to the boys and talked about what kind of Pirate Face Paint they wanted.
Anthony wanted a complete pirate transformation. 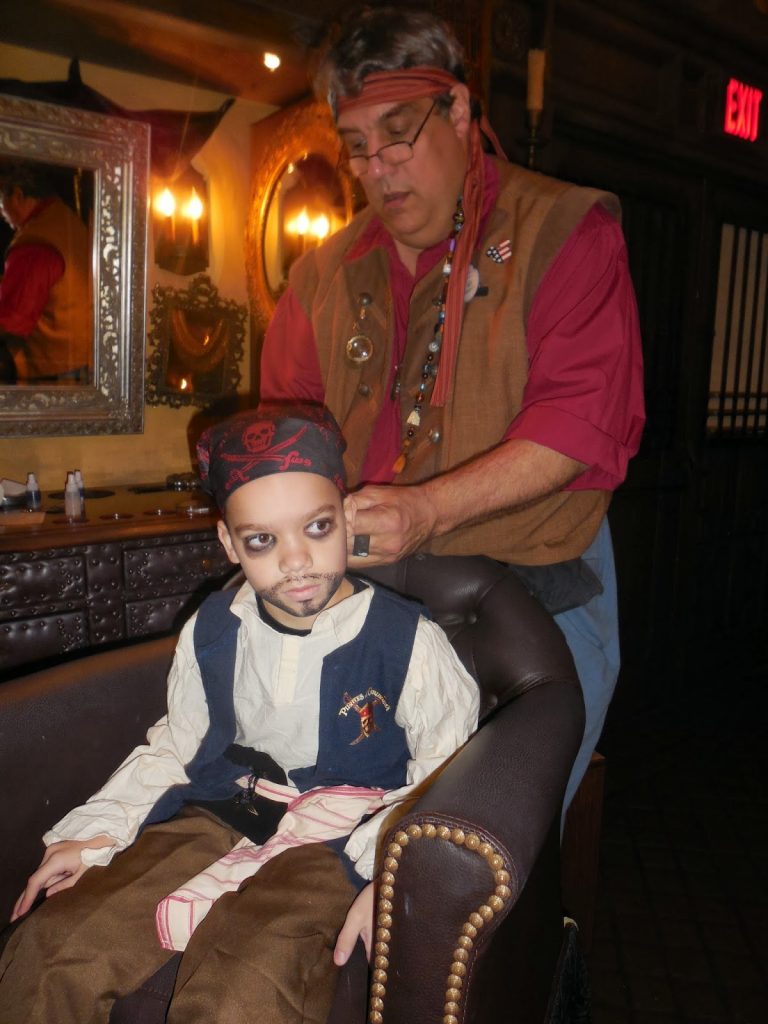 Aidan, on the other hand, is not a fan of face paint, the idea of it usually causes a complete meltdown.  However his pirate master was amazing with him, she took it very slowly, really connected with him and he ultimately agreed to a little cut on his cheek, which he was very proud of.  He kept asking to look at it for the rest of the day.  These are the types of memories autism moms dream of when planning Disney vacations. 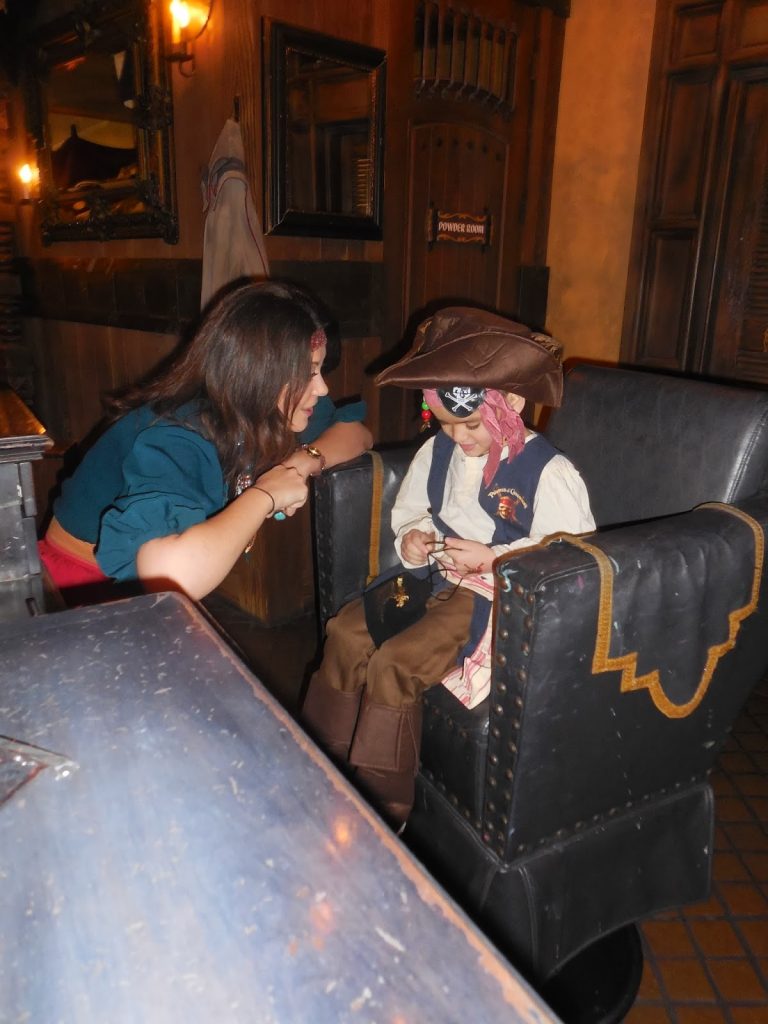 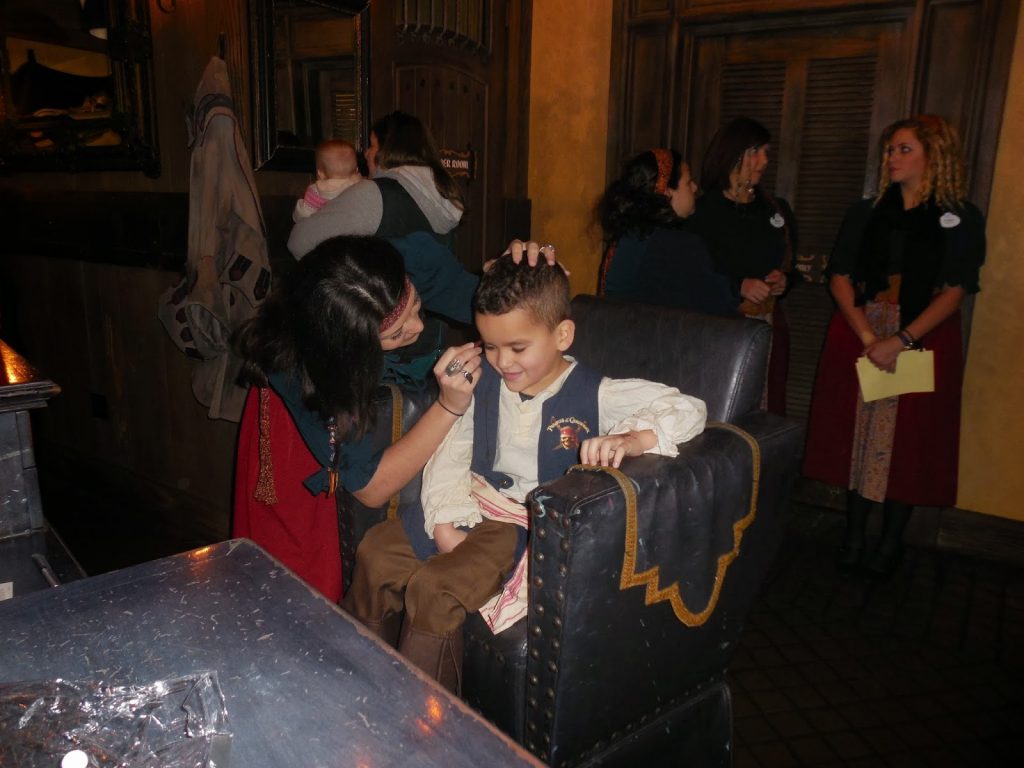 Once the boys looked the part it was time to take their Pirate Oaths, which they both giggled though! 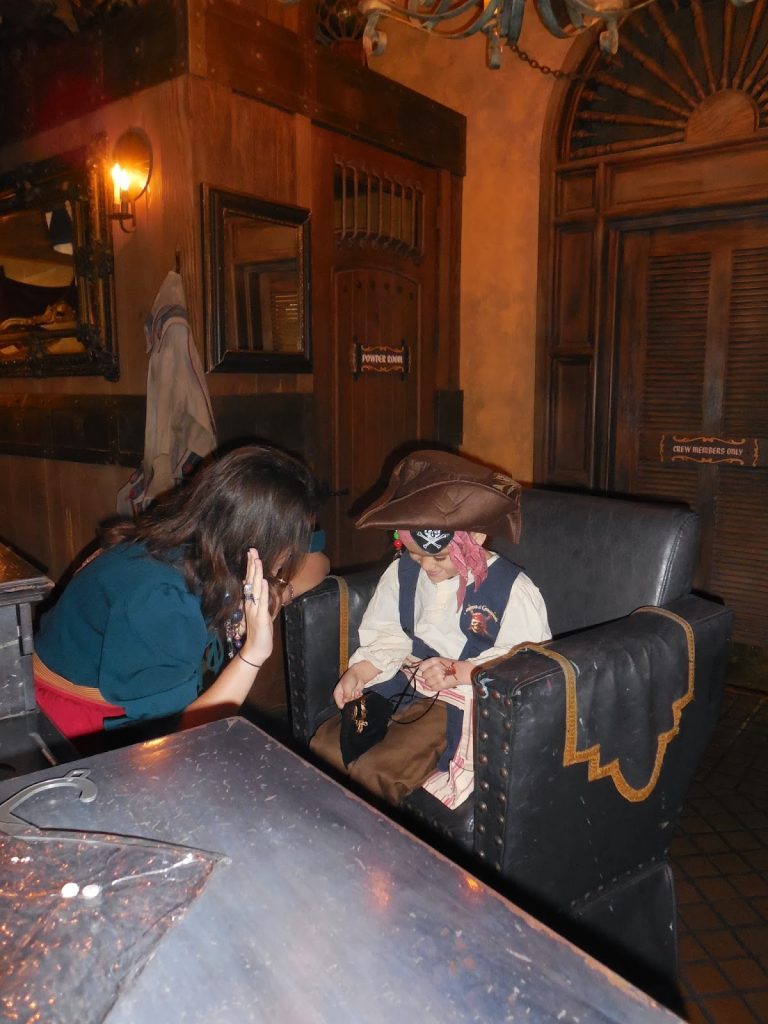 After your pirate transformation, and you’ve taken the pirate oath, you are able to enter the “secret” room to learn about a hidden treasure and get pictures taken.
Once the boys were official pirates and new all about the pirate’s secret treasure, it was time to check out, where the boys received their Pirates Pledge with their pirate names on it.  This is an adorable keepsake, that the kids loved showing everyone. 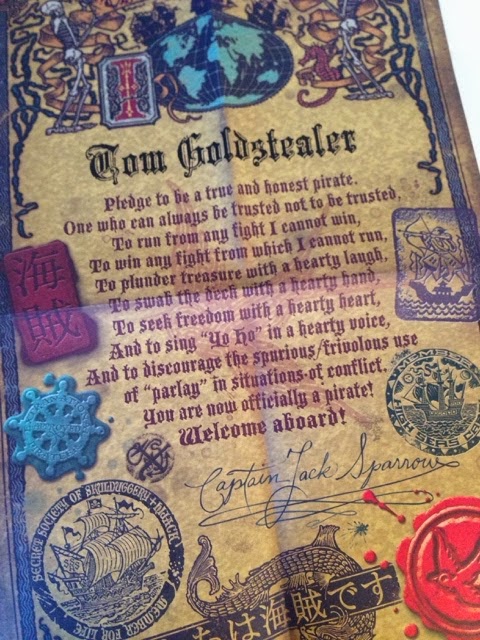 I highly recommend visiting the Pirates League during your trip to Magic Kingdom. The boys had so much fun, and their faces throughout the entire experience were priceless.

This was so much fun and like Bibbidi Bobbidi Boutique, the fun doesn’t end after the makeover!  On all the Disney buses they played a special announcement saying there was a pirate on board and all the cast members called them Pirates throughout the day.

The Pirates League is another one of those incredible Disney experiences that are unique and cool, which make memories that last a lifetime! 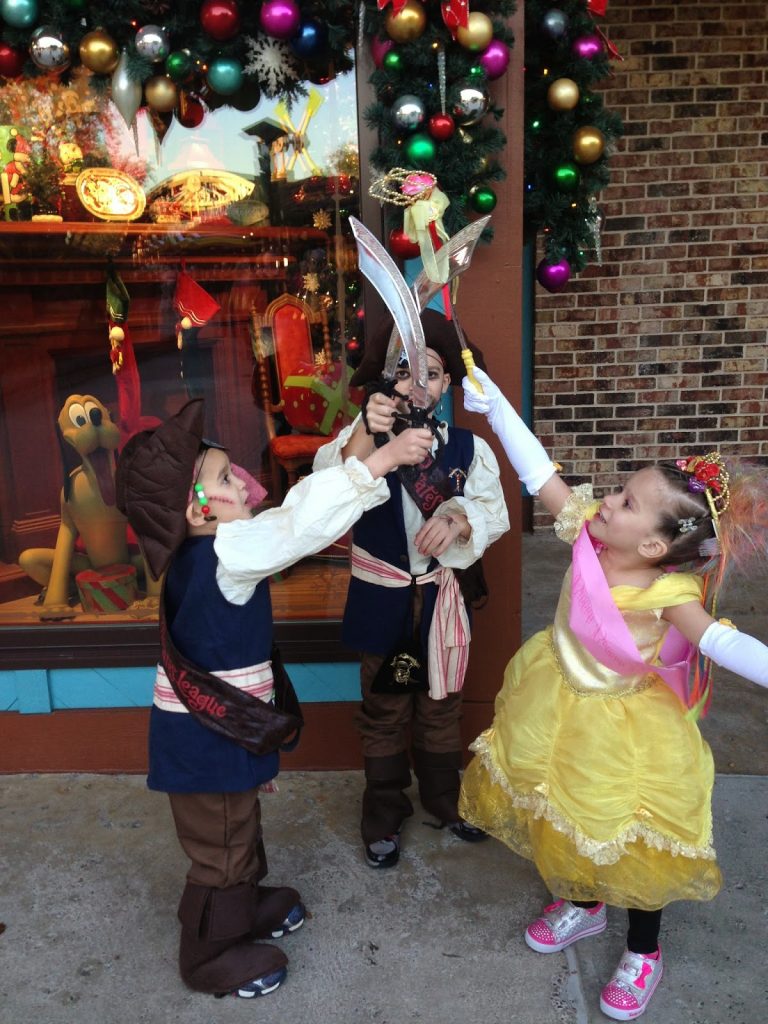 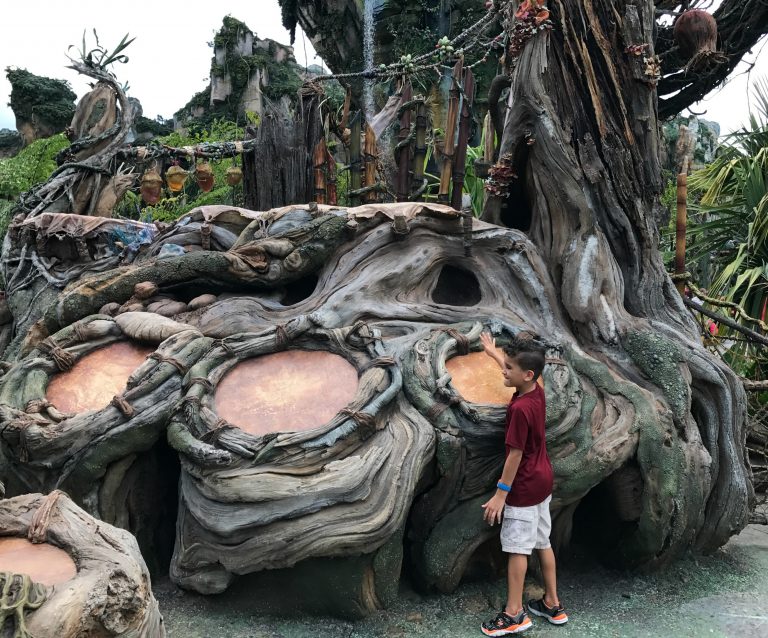 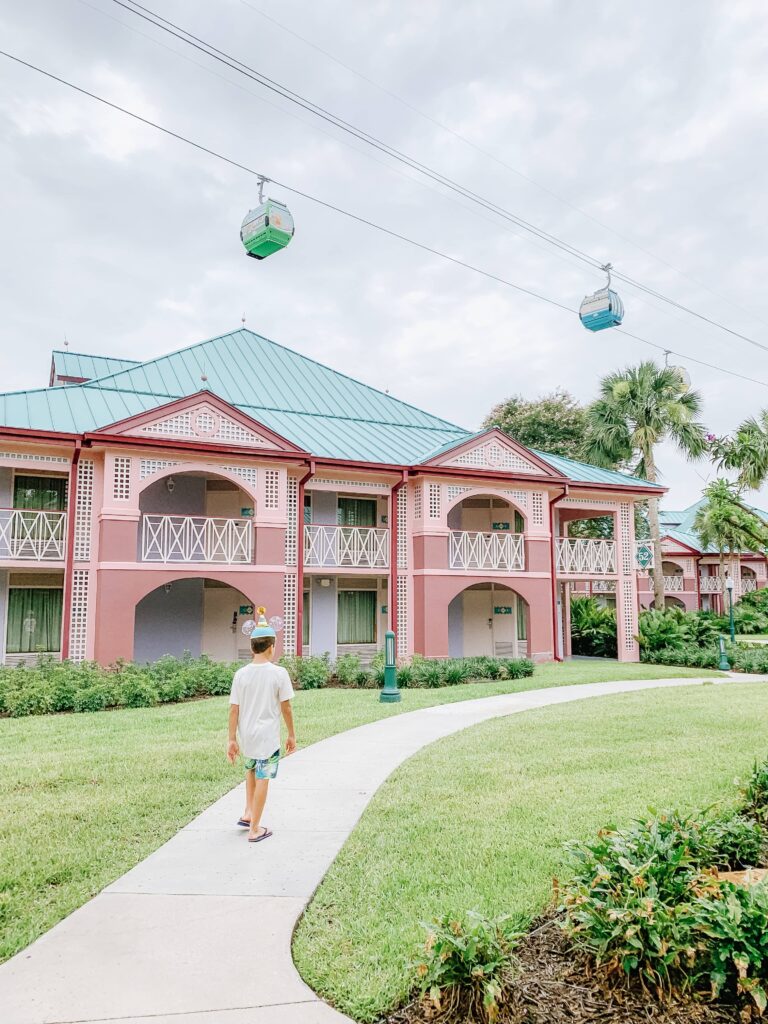 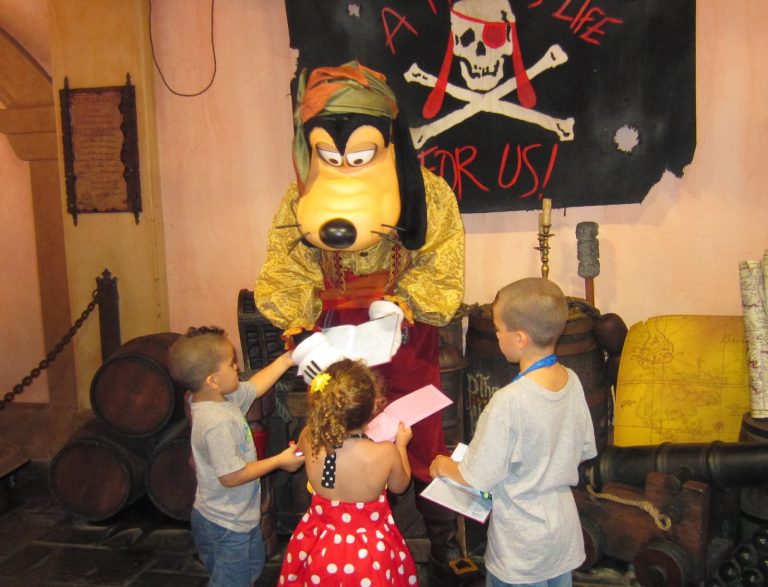 With this list of Disney World child care options, Your kids will have tons of fun and you can totally relax or head over to Epcot for a margarita! 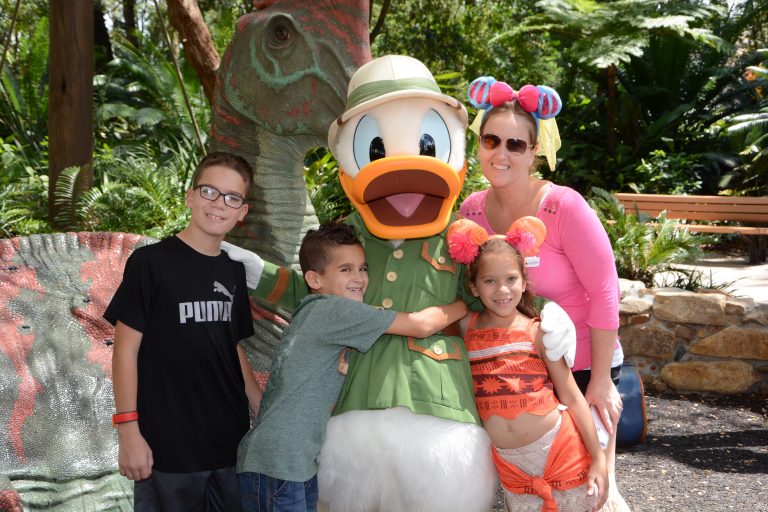 Animal Kingdom is now a park I like to stay at from morning until far past when the sun goes down.  However, no matter how much time you have allocated, there are certain Animal Kingdom attractions that should not be missed. 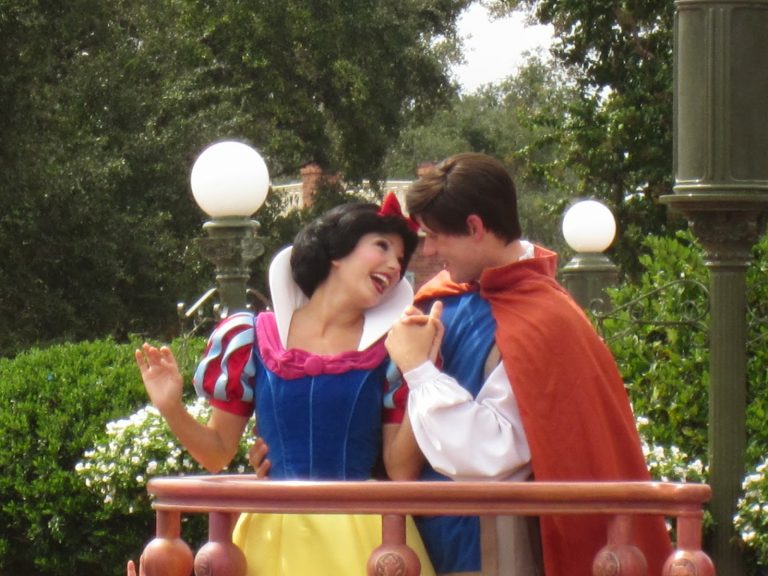 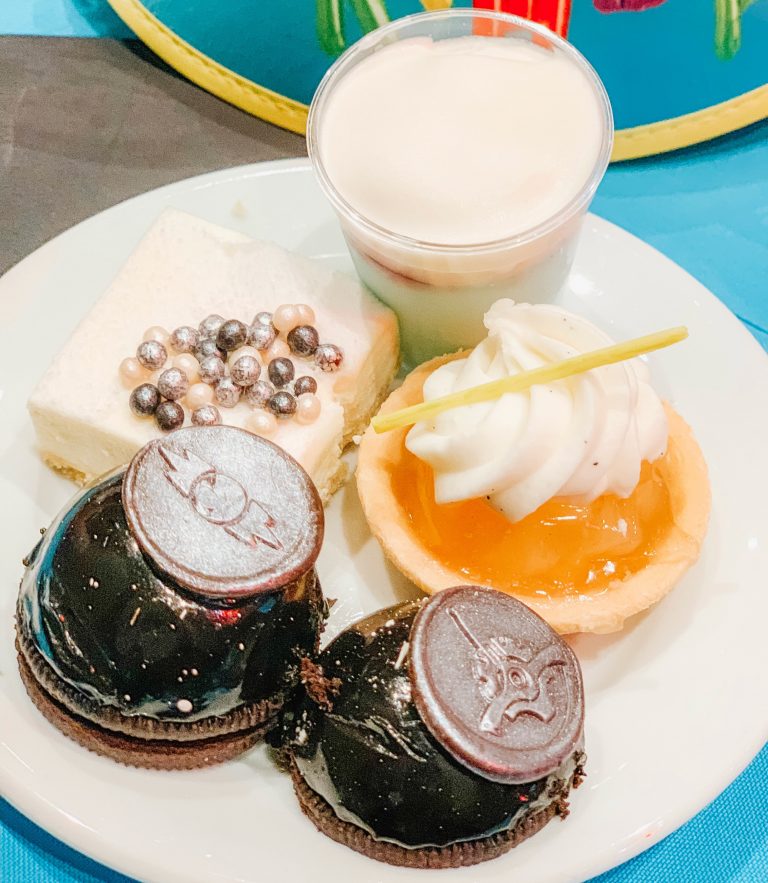 Here are just 5 of the best Walt Disney World extras to help you celebrate any special occasion for a better vacation than you ever thought possible.