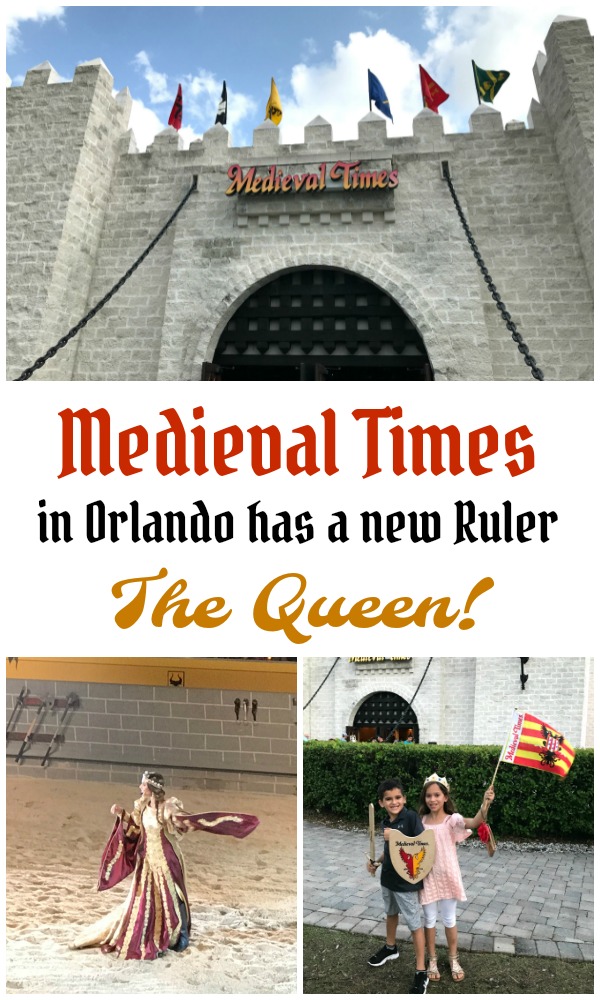 Last weekend we were invited to see the amazing new show at Medieval Times in Orlando. We had never attended this dinner show, but I have heard people rave about it for years so we were excited and intrigued. On April 19th, the Orlando Castle made a Queen the new royal ruler for the first time. The Queen replaced the king, her father, who had ruled the kingdom for over 34 years. This is an impressive move by Medieval Times and I have to say the show was magnificent! 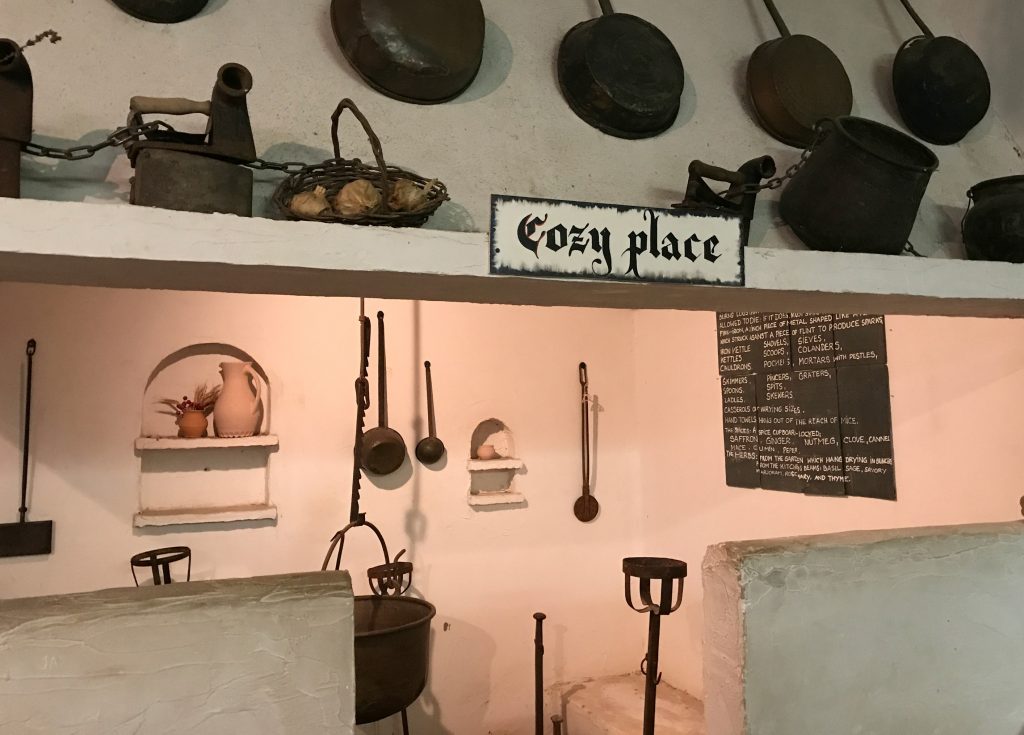 We arrived at the kingdom about 30 minutes before the castle doors opened to take a tour of the Medieval Village which was packed with authentic artifacts from Spain. This was a great experience which was very educational, so I definitely recommend arriving early and strolling through the village and learning about what life was like in the medieval times, especially because Orlando is the only castle to host a village with these artifacts. We learned how people lived depending on their career, saw the horrifying torture methods they would use on criminals, and learned out how people dressed and cooked during that time period. 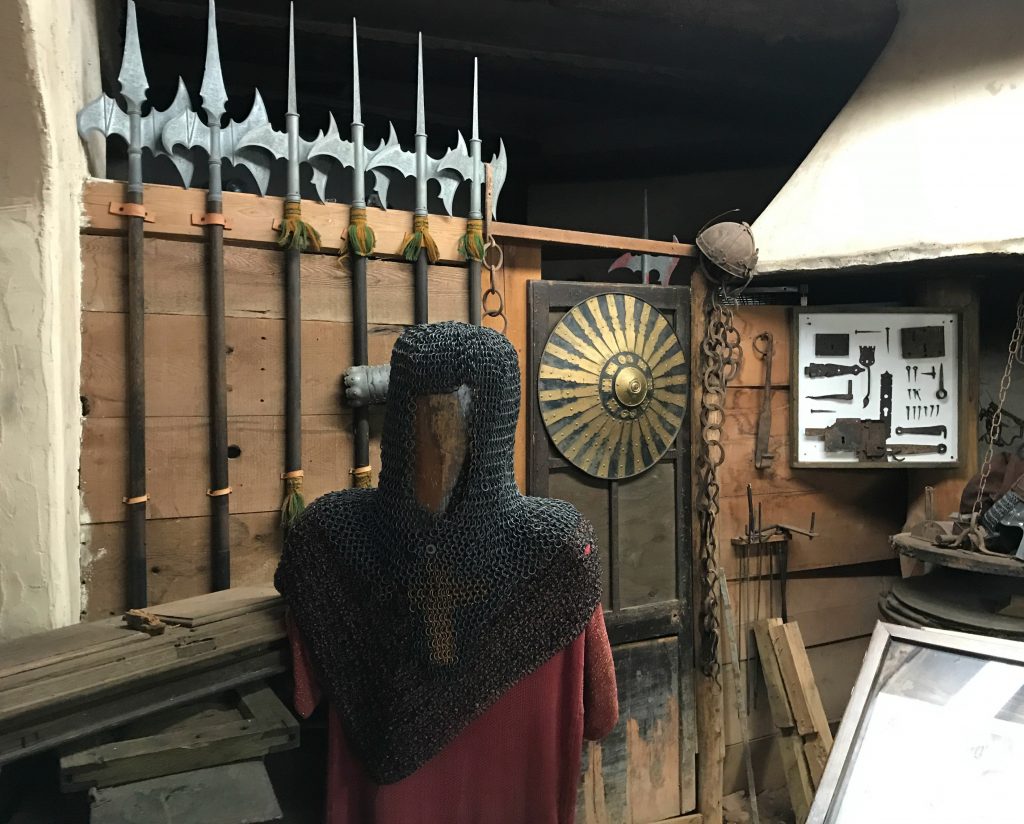 The artifacts alone are a sight to be seen, for instance, this book is over 600 years old and made of animal skin! 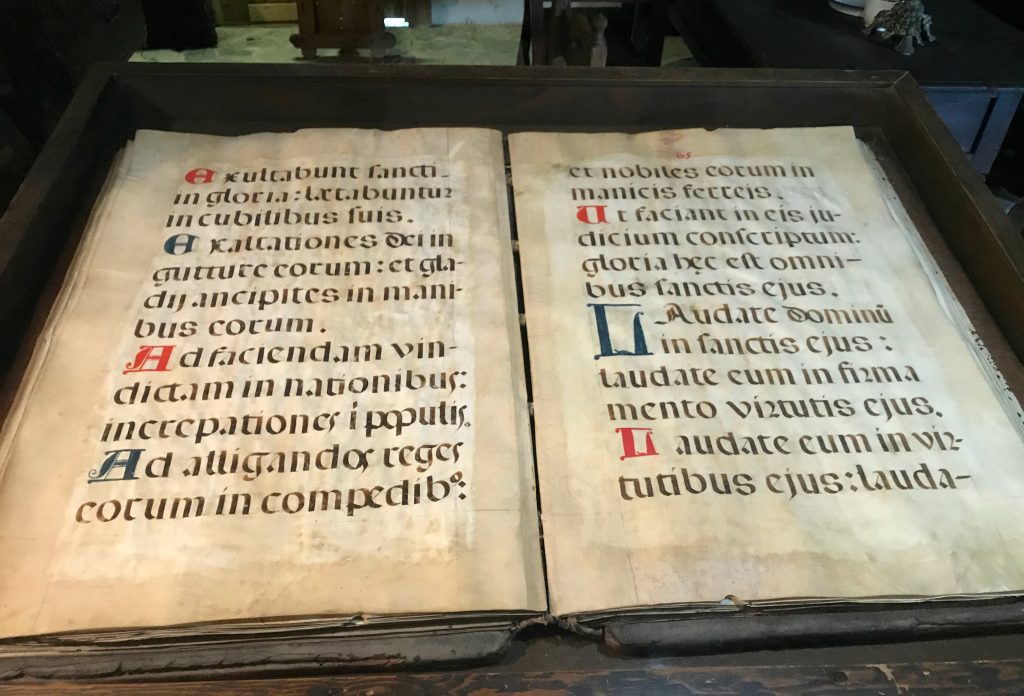 Once the castle doors open, you purchase your tickets and get in line to have your photo taken with a character from the show. They bring the photos around during the show for you to see and decide if you’d like to purchase one.

Then you are lead into a large room that is filled with souvenirs you can purchase including flags that coordinate with your seat’s knight, purchase a birthday package or a beverage at the bar.

Once everyone one is in, they begin calling in color groups based on your ticket in to be seated. 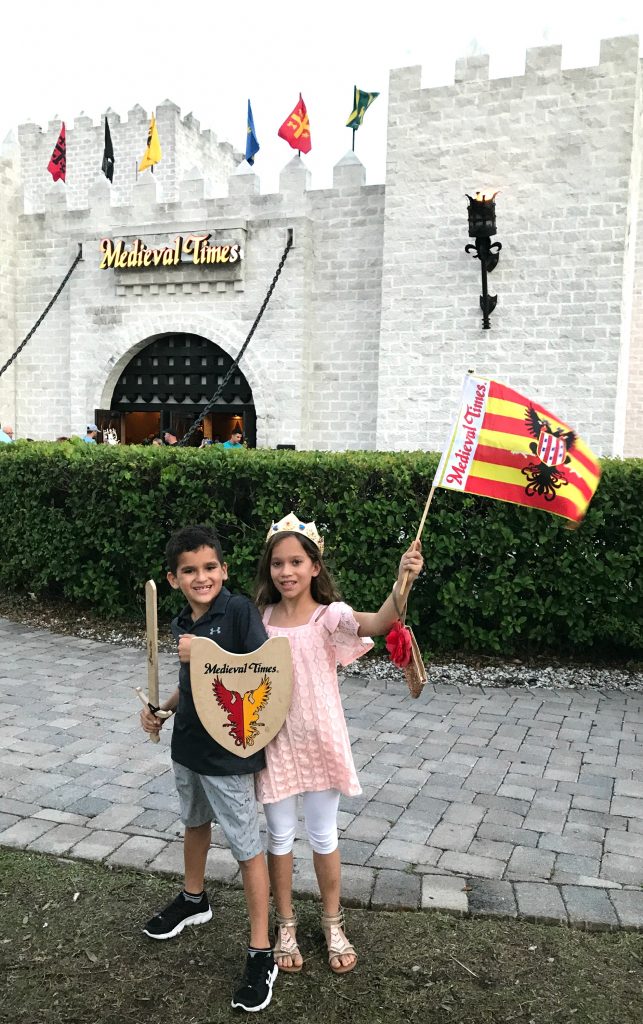 The Dinner at Medieval Time

Don’t expect a fork and knife and make sure your hands are clean because at Medieval Times they are your utensils! We were served tomato soup with garlic bread, followed by a large piece of roasted chicken, a baked potato, and a piece of corn on the cob, and a piece of pound cake for dessert. The food was delicious, I was impressed that even Aidan the pickiest eater of all ate everything! 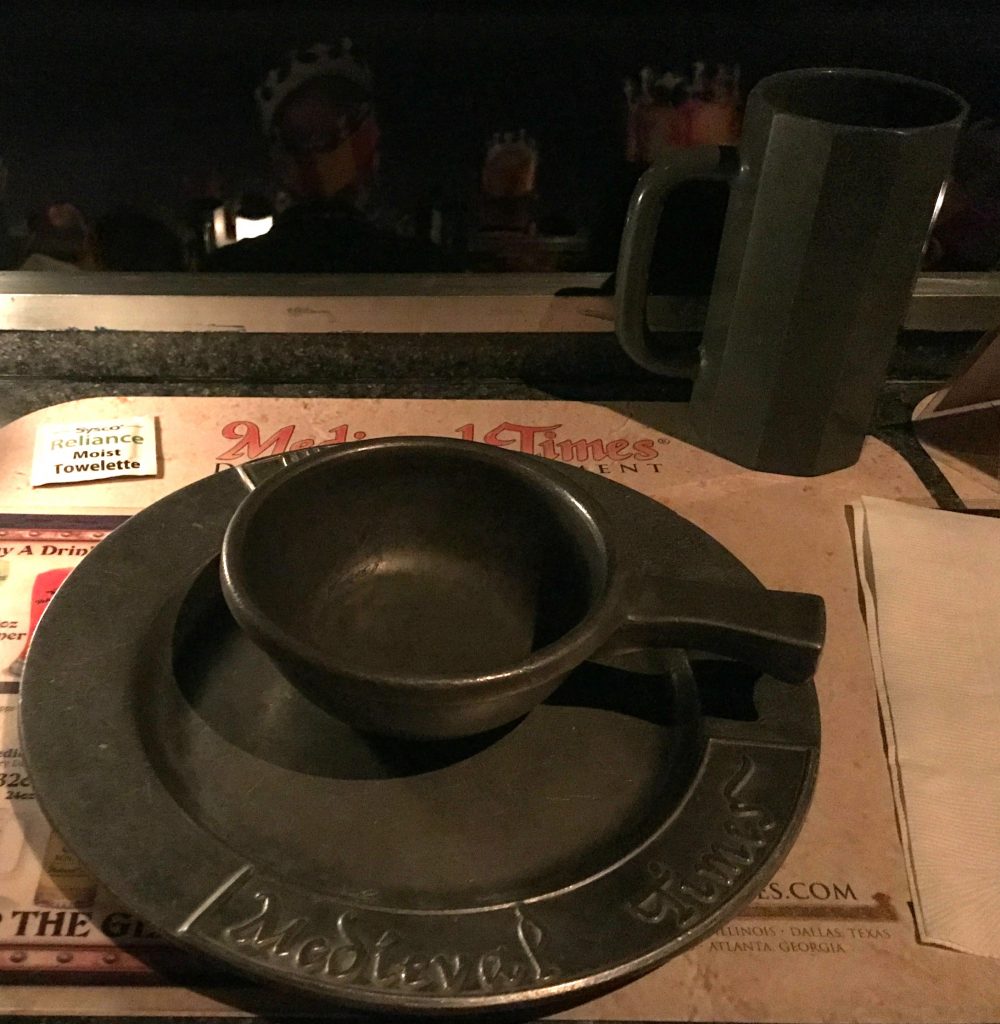 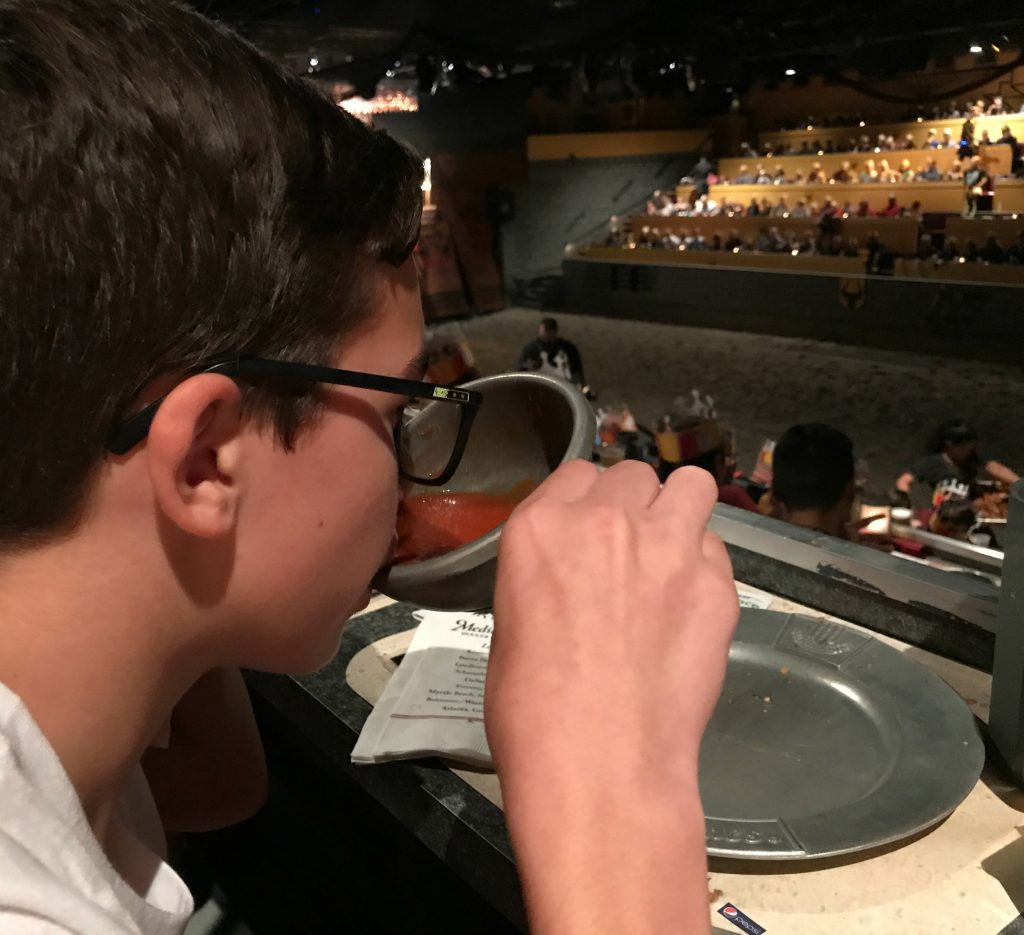 This is a fun show full of jousting, hand to hand combat and sword fights! Plus, what makes it such a great show is that everyone truly gets into the spirit, cheering on their knight. Lilly got a flag on the way in and it was being waved the entire show, while Aidan was so excited it was hard to keep him in his seat as he cheered and clapped for our knight throughout the knight battles. 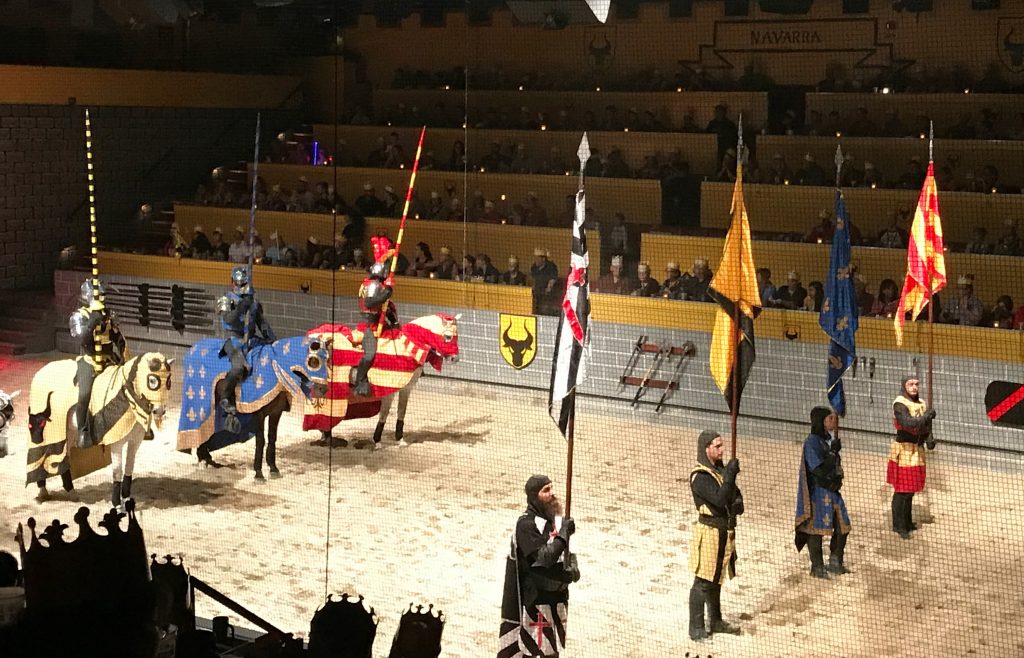 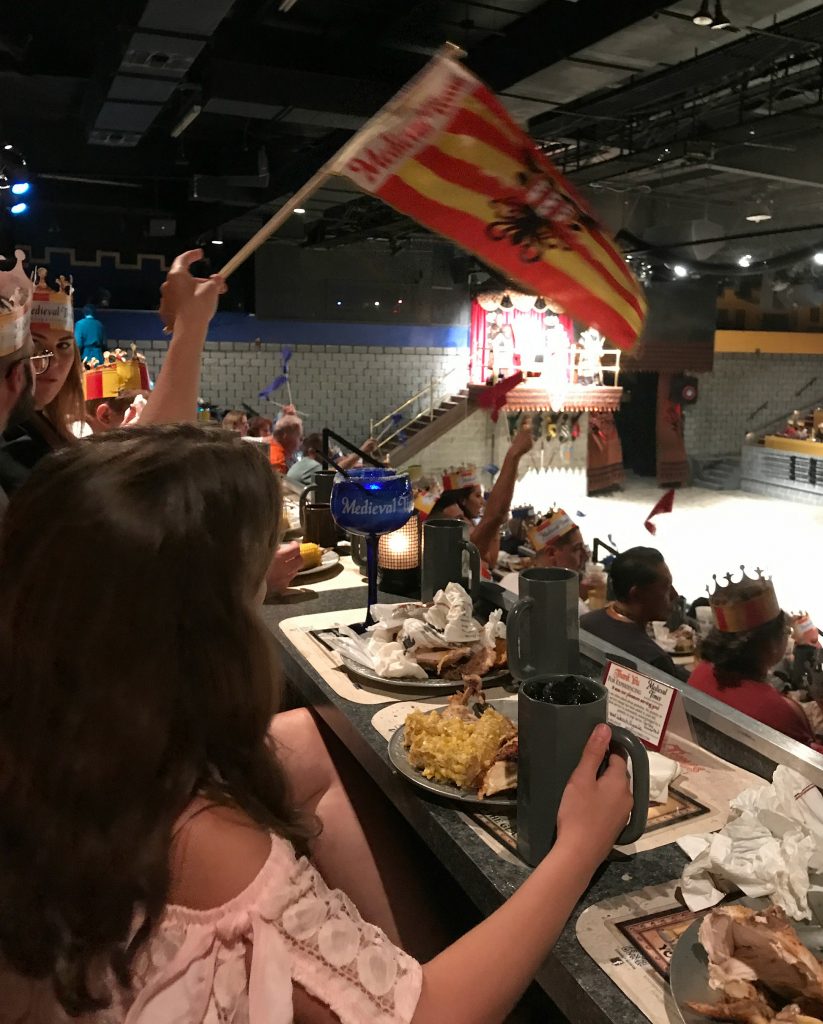 Lilly and I were both in awe of the horses, especially the white horse that seemed to dance as she performed. It was like watching a unicorn! We also loved the Queen who was a kind ruler of the kingdom, however not afraid to stand firm and be a strong leader when needed. 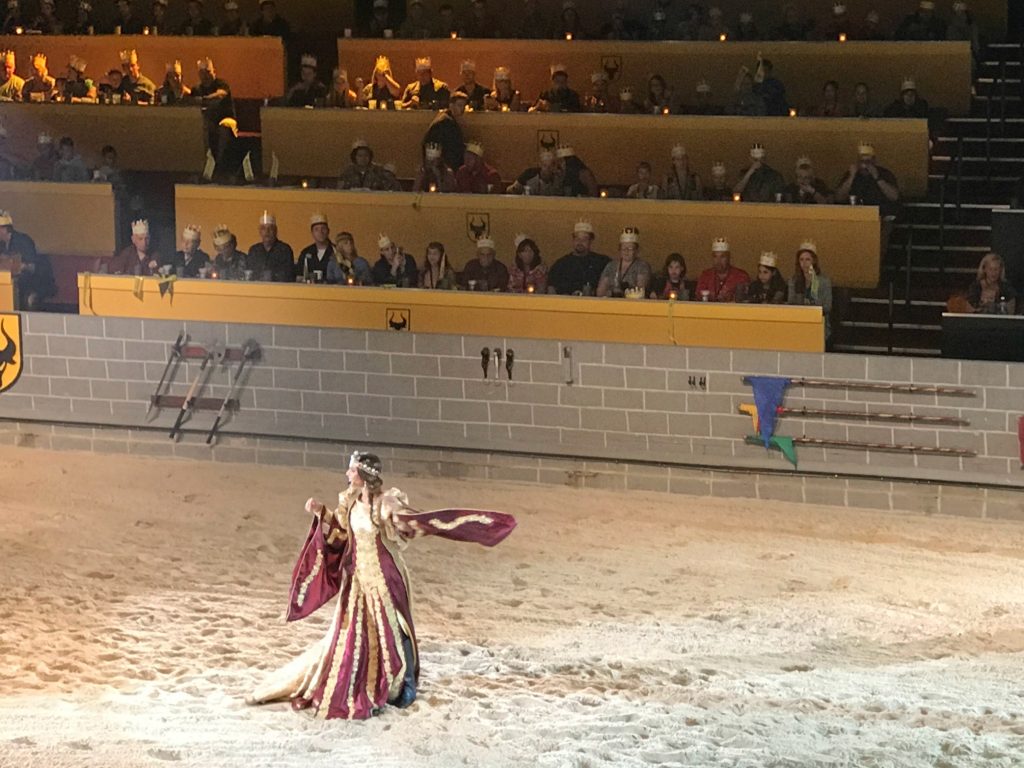 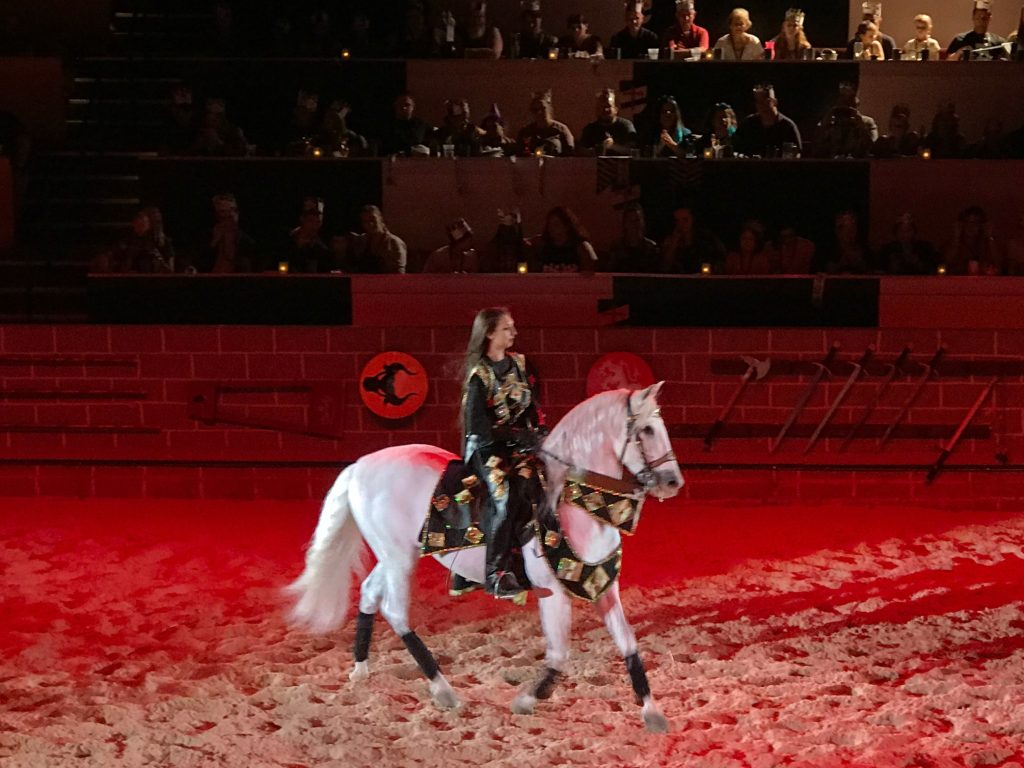 This new performance is a must-see while in Orlando!

When to Visit:
Shows take place daily, visit medievaltimes.com for showtimes and tickets.
Cost of Admission:
Adults $62.95
Kids (12 & Under) $36.95 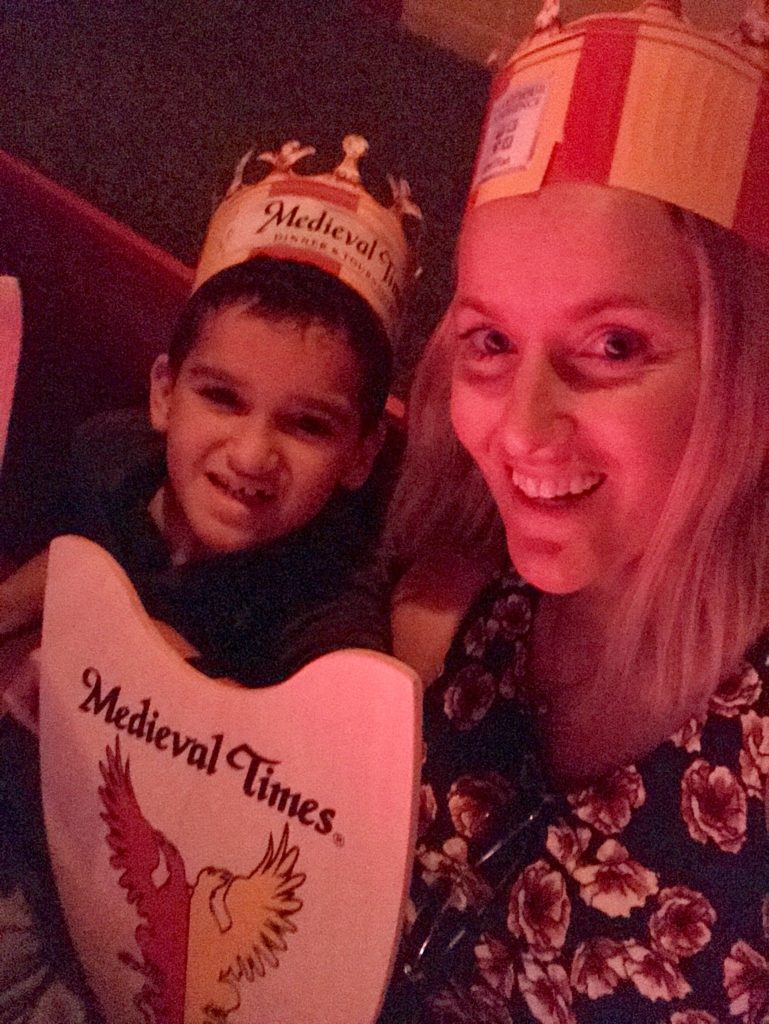 Disclosure: We received free passes to help facilitate this post. All opinions are 100% my own. 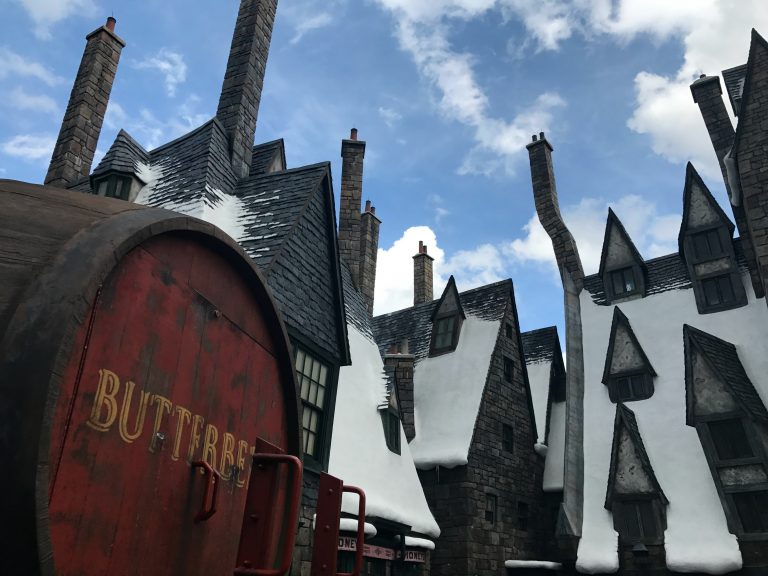 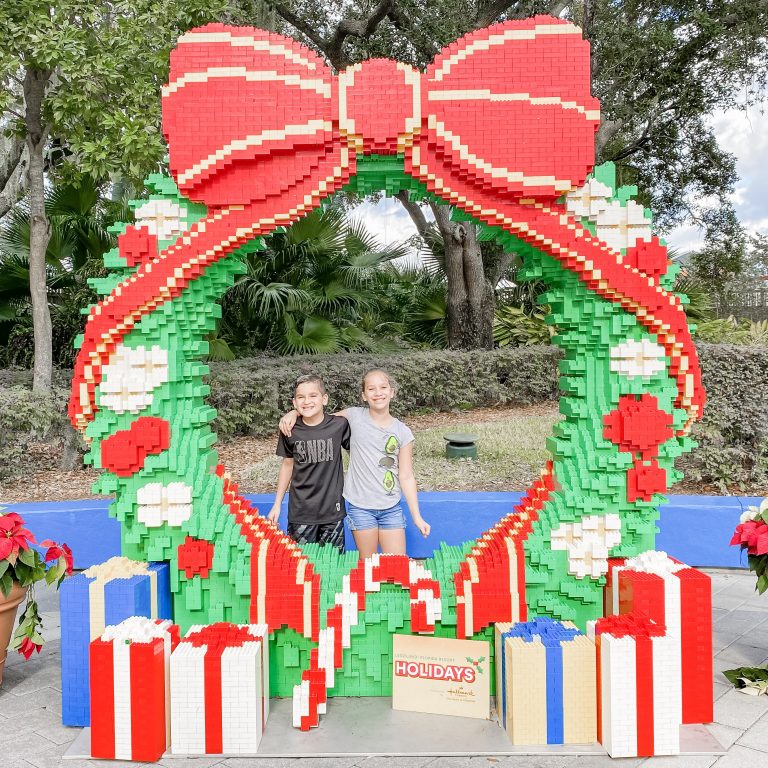 Guide to the Holidays at LEGOLAND Florida event presented by Hallmark Channel. what you need to know before you go, and 4 reasons you’ll love this event. 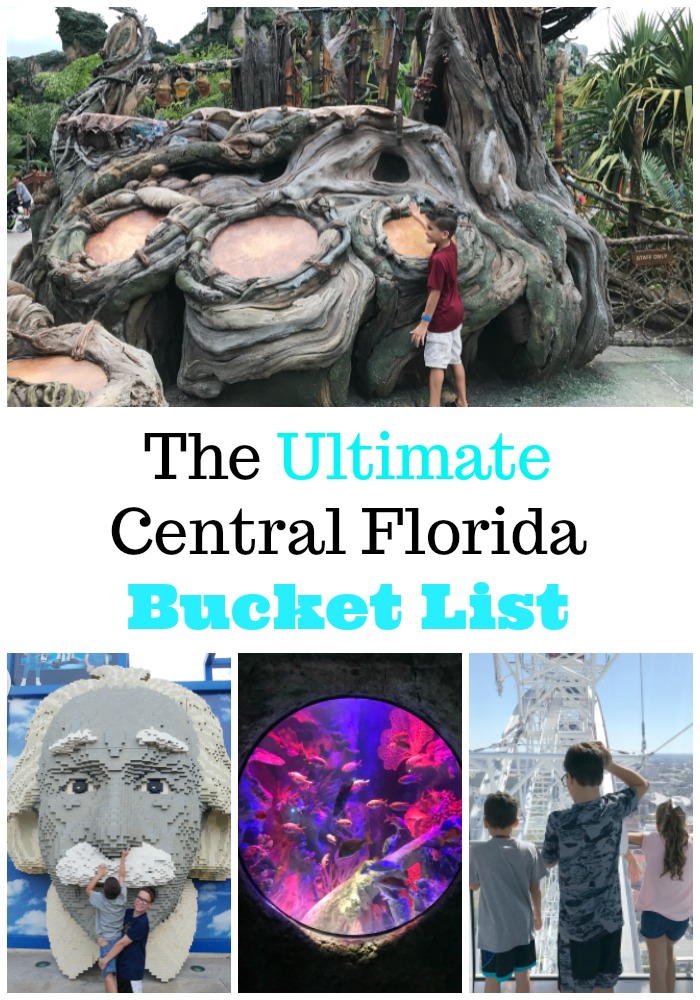 The ultimate central Florida bucket list of family fun. Florida is packed with places to have fun and with your family, here is a list of some of the best. 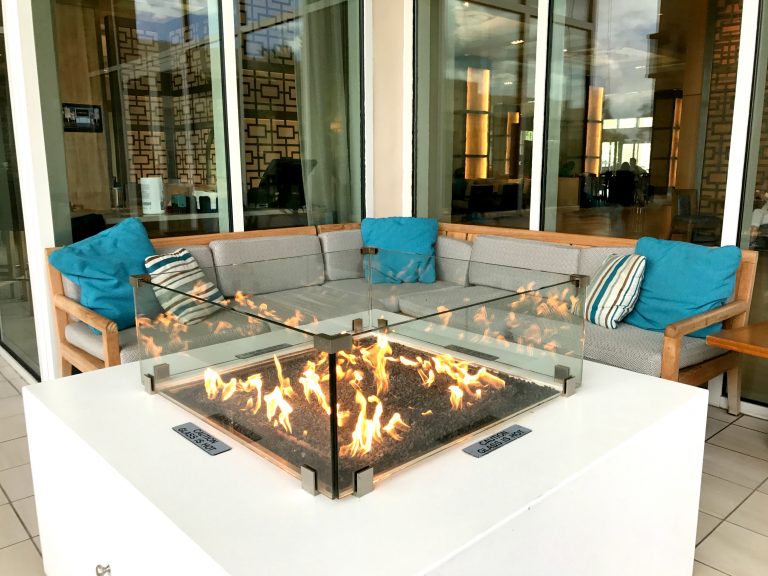 The Hilton Bonnet Creek in Orlando is a perfect hotel for families looking for a place to stay during a Disney vacation or seeking a getaway to relax. 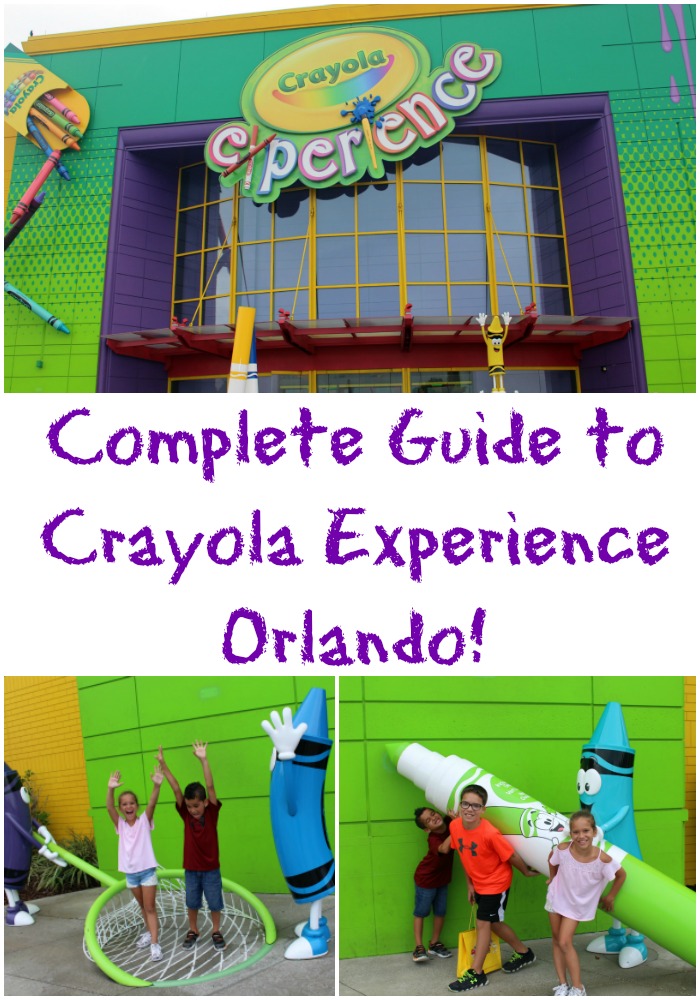 Inside Florida Mall is a colorful wonderland called the Crayola Experience Orlando! Learn how crayons are made and get your artistic mind flowing. 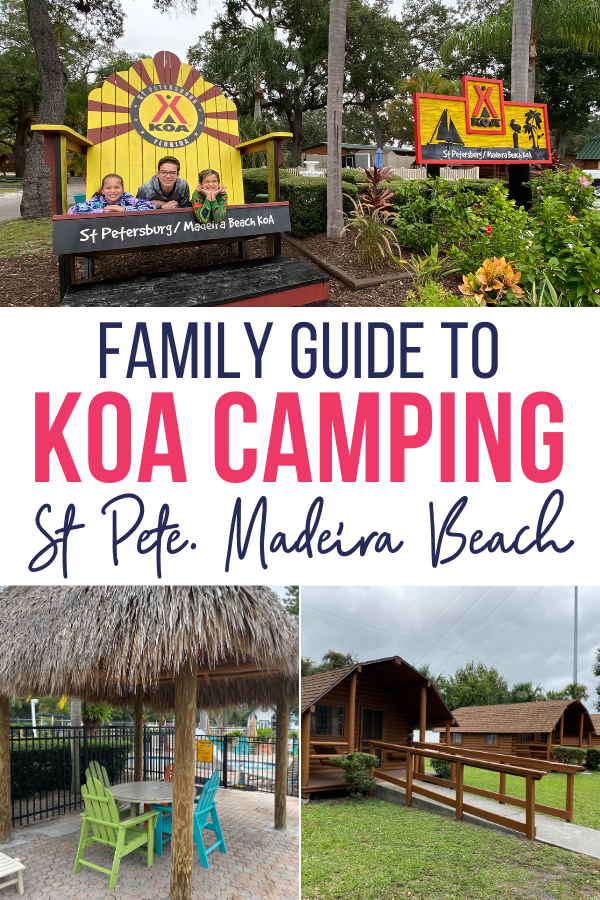