427shares
Disclosure: We were invited to ride the Polar Express by Edaville USA at no charge, all opinions are always 100% my own. 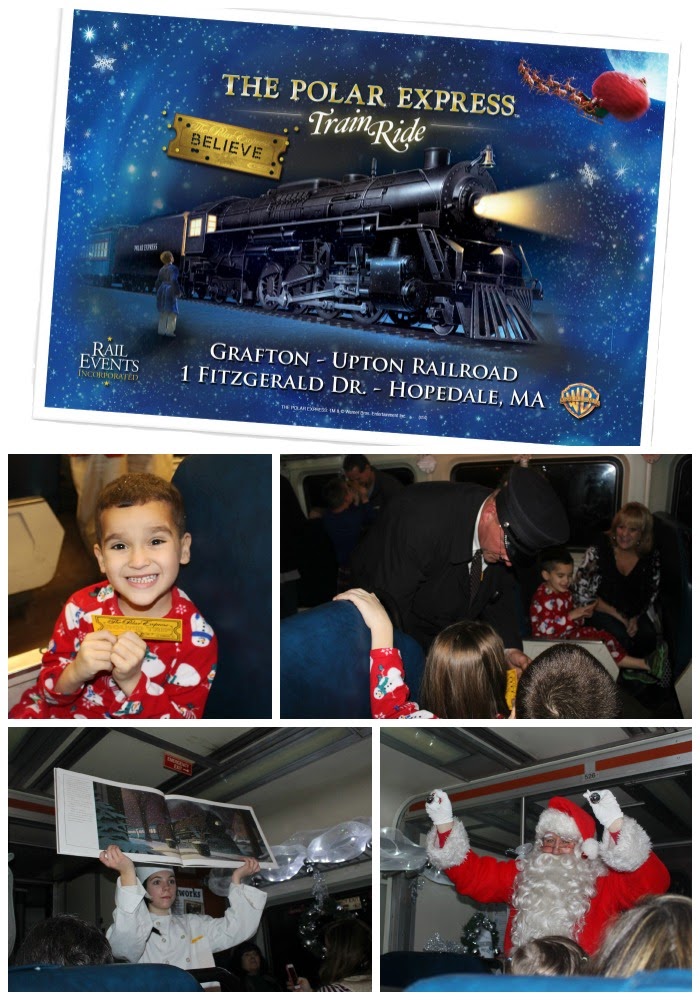 Do you Believe?
We had the opportunity to ride the Polar Express is Hopedale, Ma on Sunday night.  This was our first Polar Express experience and the kids were beyond excited to take a magical trip to the North Pole!
The kids got into their comfy Christmas jammies and we headed down to the Grafton/Upton railroad where the Polar Express was waiting for all the passengers.
Before boarding there is a cozy fire pit outside the tent, then inside the tent, they had a concession stand available with hot dogs, hot chocolate, mac and cheese and more at very reasonable prices.  There was also another table set up for souvenirs but it was off to the side and not a popular area which was awesome!  No pushy sales of light up crap, just some books or t-shirts if you wish, loved that.  The best thing under the tent had to be the life-size snow globe!  I have never seen anything like this and the kids were ecstatic to get to clime in and shake up all the snow! 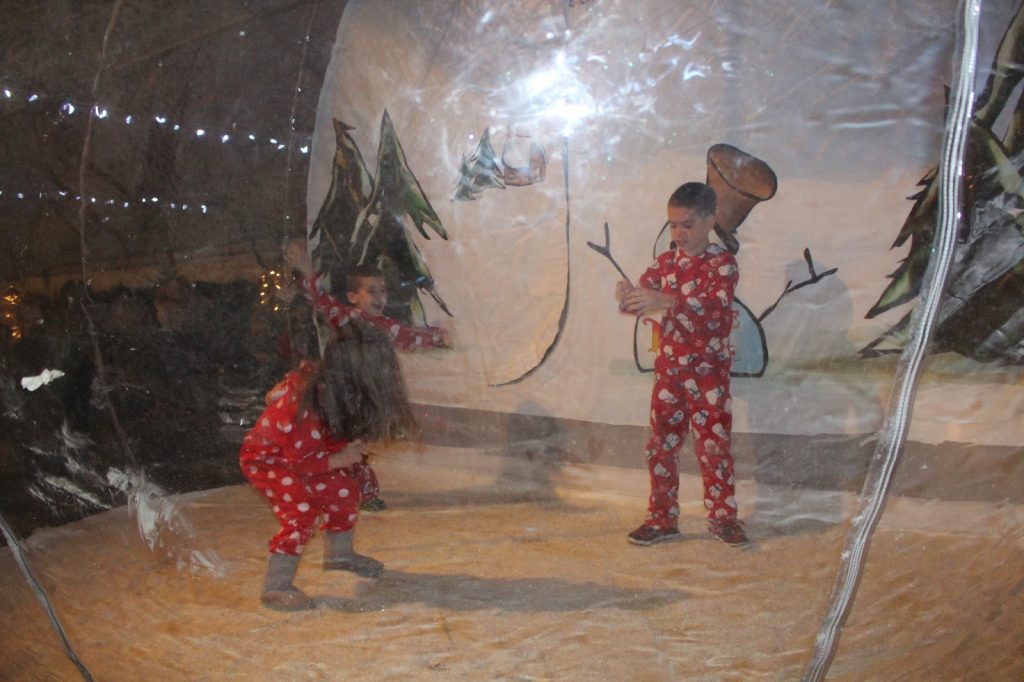 Once we boarded the beautifully decorated train, everyone received their golden tickets and listened to the Christmas carols being played in the background as we waited to embark on our magical trip. 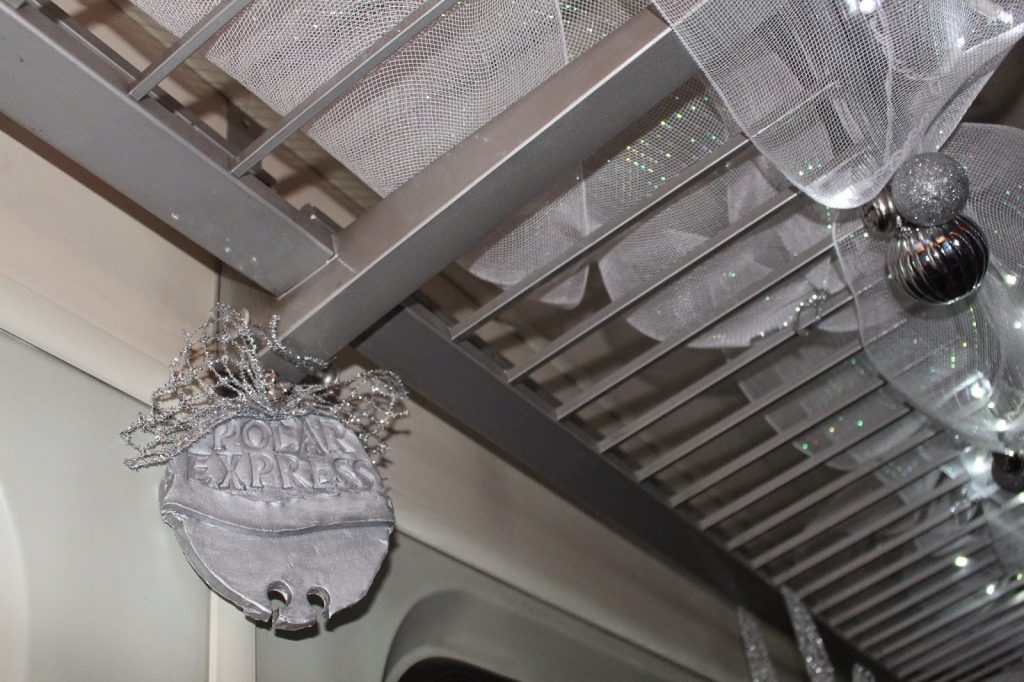 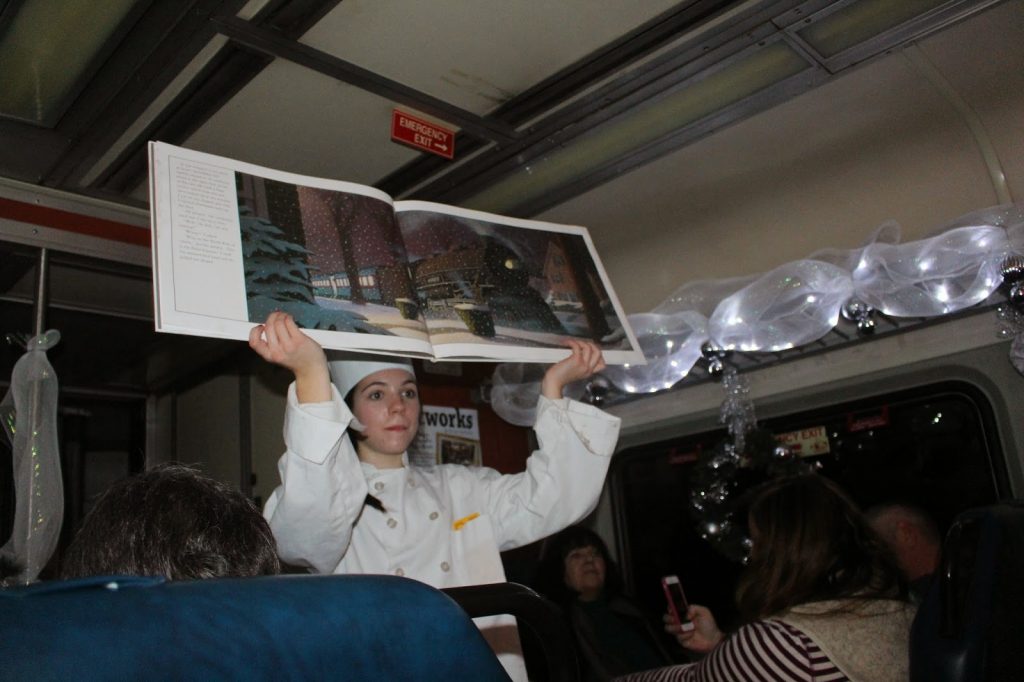 After story time, the waiters and some cast members sang and danced through the aisle as we all sang Christmas songs.
Then the conductor came through to punch everyone’s golden tickets.  He was so nice and friendly, the kids all loved him! 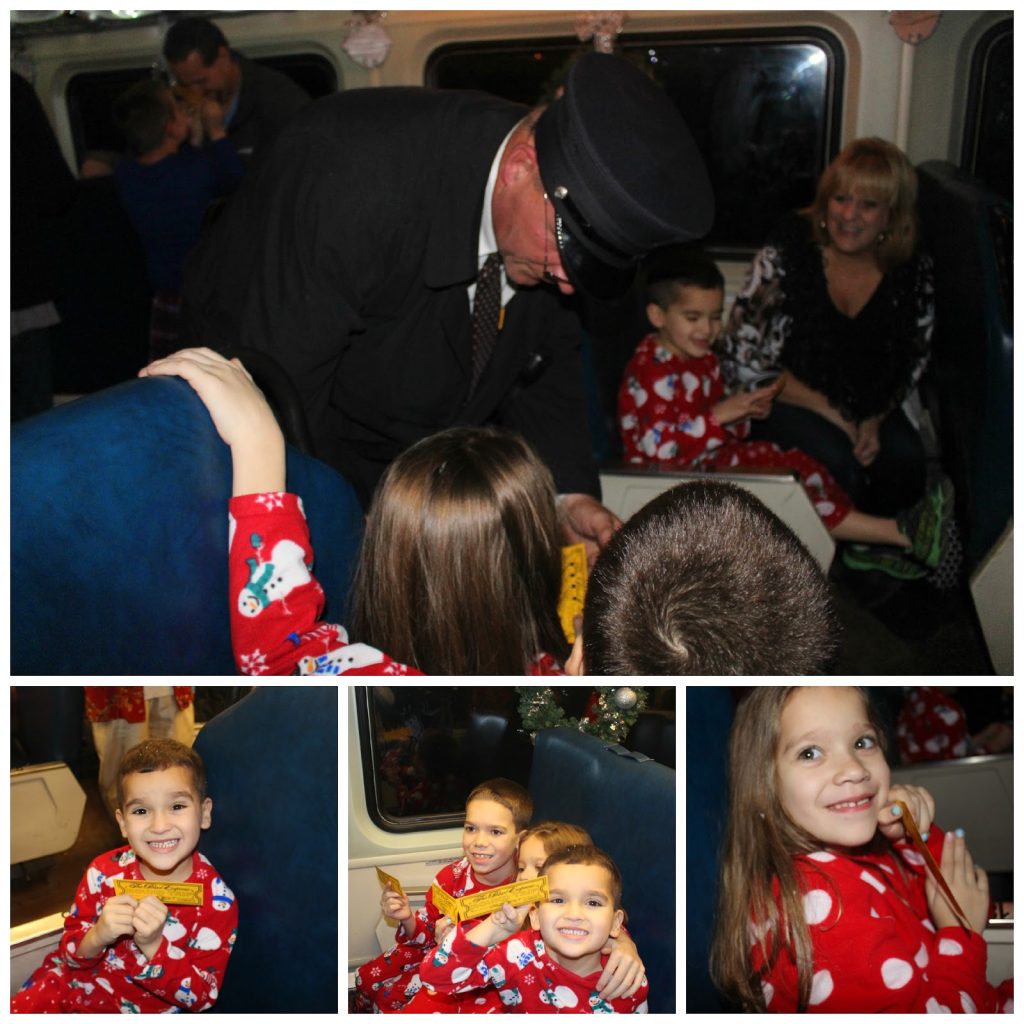 Finally, we arrived at the North Pole, it was announced over the speaker that we had arrived and for everyone to look out the window!  Santa was standing there waving with a lit up train station behind him! 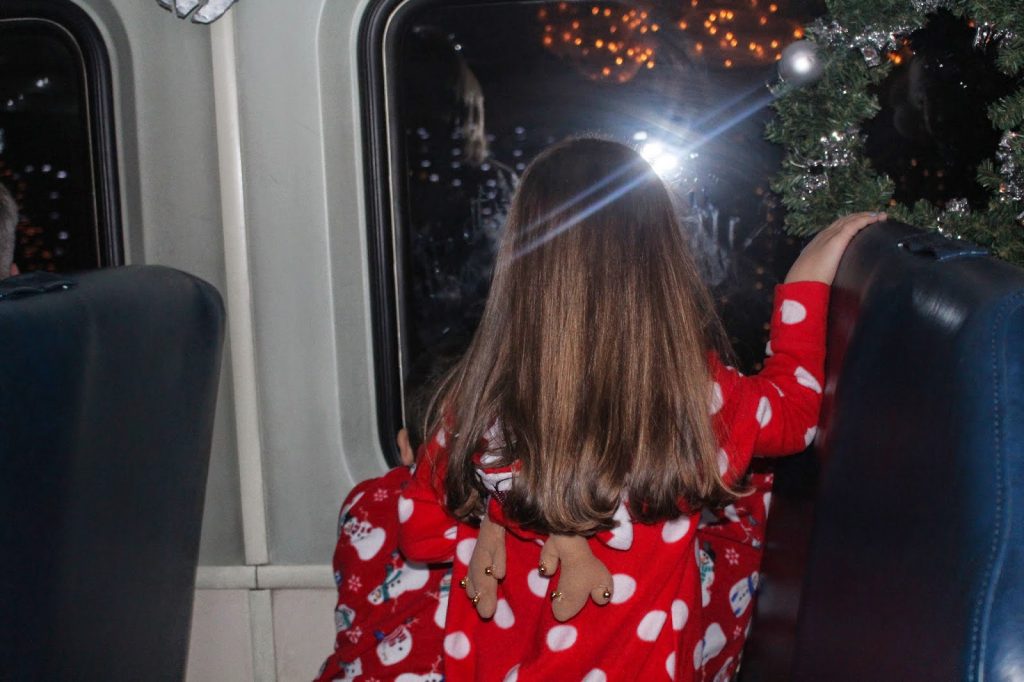 Then Santa boarded the train and visited with all the children.
He asked them what they wanted for Christmas and gave them each a special gift, a bell from his sleigh! 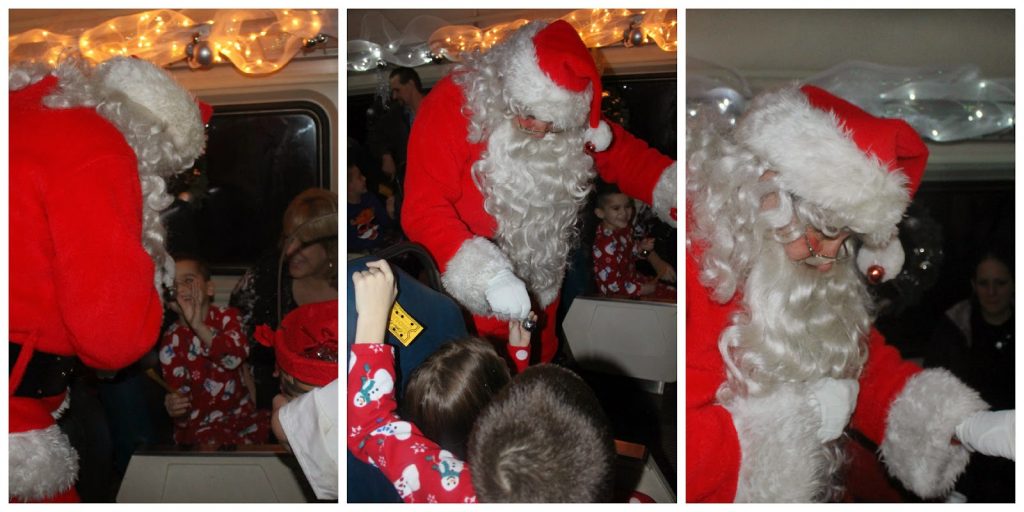 This was such a fun and magical trip, a memory that will last forever.  The kid’s faces were gleaming and they are still telling everyone about their special trip to the North Pole! 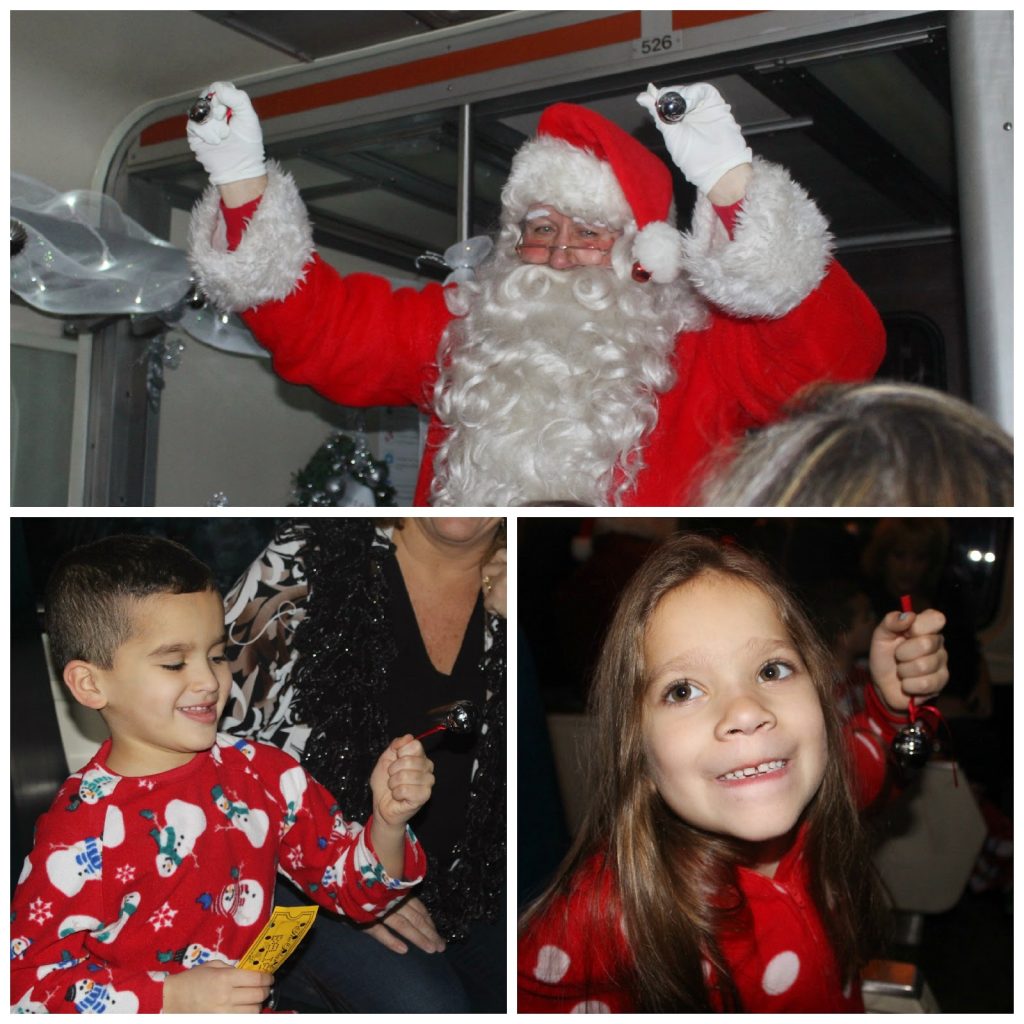